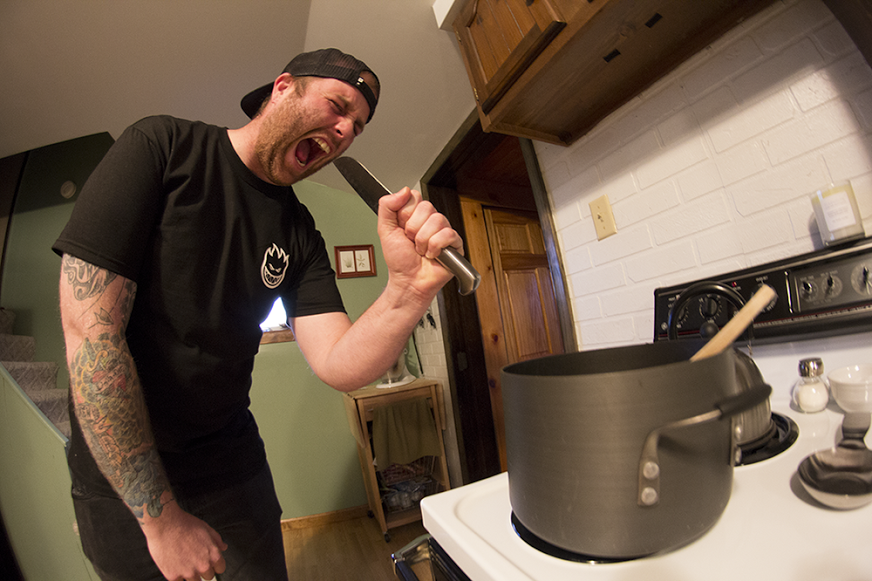 DULUTH, Minn. – With the whole house to himself, 30-year-old Mark Carson suffered a severe facial laceration after a sing-along mishap in the kitchen of his suburban home.

With his wife out of town on business, Carson made the mistake of using a Chef’s knife as an impromptu microphone as he re-heated a small amount of leftover ravioli to serve as his dinner.

“I was just so hyped,” Carson explained through clenched lips. “I was listening to Taking Back Sun—I mean—Incendiary, and when the chorus kicked in I was so amped I just grabbed the knife without thinking.”

Carson then drove himself to the hospital, bringing along his first generation iPod Touch to continue singing in the car, despite bleeding profusely. “It made me feel like Iggy Pop,” Carson said gently dabbing the blood from his face with a napkin.

The accident ignited a series of frustrations for Carson, including a $750 hospital bill as well as a $200 parking ticket for leaving his car in a spot reserved for emergency workers.

Now Carson is faced with the unenviable task of coming up with a less-embarrassing explanation for his facial injury. With a large variety of household repairs to choose from Carson believes that claiming the accident happened while fixing the motor on his garage door might be the most believable. “This way my wife should feel bad about hassling me to fix it, so she won’t ask for too many details,” explains Carson.

Most upsetting to Carson is the knife incident has consumed precious hours of playing video games in his underwear. Carson laments, “I knew I should have listened to The Cure.”