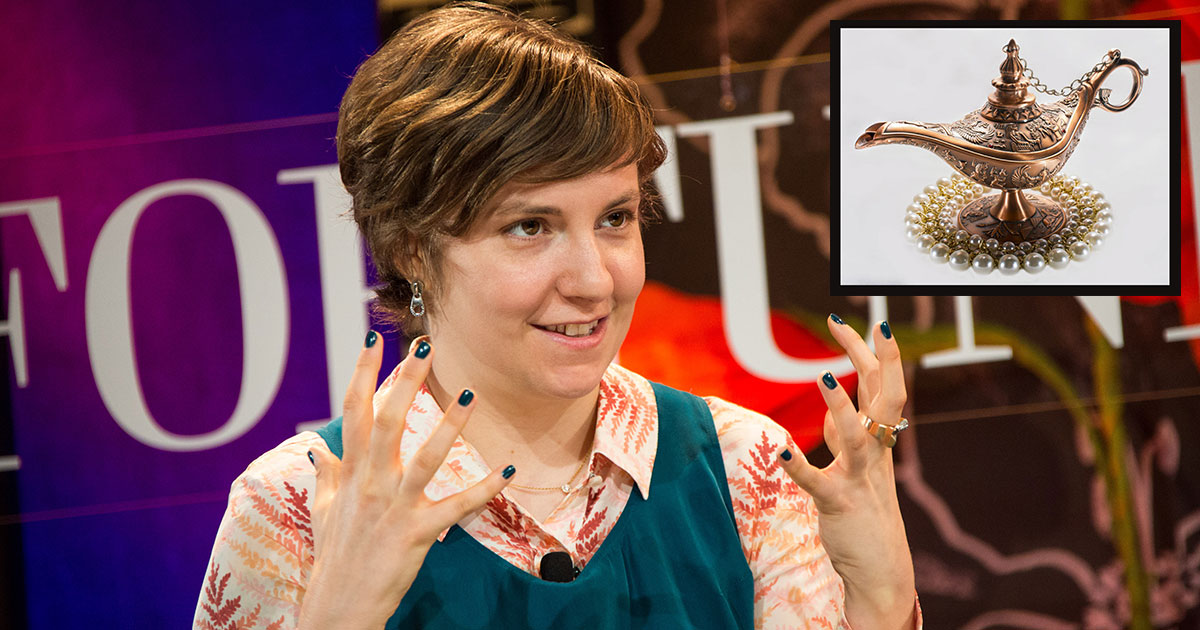 NEW YORK – An ancient genie, sworn to grant three wishes to whomever releases him from his magic lamp, was taken aback by his current master, Lena Dunham, and her unorthodox wish this week.

Dunham is no stranger to controversy and is known for saying outrageous things in interviews and books, but this week she is making headlines with a hypothetical wish that a lot are calling “odd” and “misguided at best.” Most concerned is a 3,000-year-old genie who lives in a lamp bought by Dunham earlier this month at an antiques shop.

“I’ve been serving Master Dunham for a few weeks, but she has yet to give me any wishes,” said the Genie from inside his lamp. “The other night however, I overheard a bit of her podcast recording and now I’m not sure how to react to the requests coming my way. I mean, I’ve never granted hypothetical wishes before. There’s nothing about this sort of thing in the Genie handbook, I’m afraid.”

The Genie, who has had experience serving masters such as Aladdin, King Solomon, and Dick Cheney said he has never dealt with wishes quite like the ones Dunham seems to have planned.

“I can magically remove any politician or law in this country. I can even instantly transport her to any state if that’s the issue. I just, hmmm… well… yeah,” said the Genie, rubbing his temples. “I have nothing against it… what she’s asking, I just uhh… didn’t see that coming. I mean come on.”

The Genie seemed agitated by the extra attention this Wednesday. “I’ve got newspapers calling, asking if I’m gonna grant the wish. My supervisor just called and told me not to screw it up. This whole thing has the potential to be worse for our PR than that fucking Shaq movie, Kazaam. Why can’t white hipsters just pass by a middle eastern lamp without buying it for their shitty apartments?” said the bottled servant. “I’ve been passed around this borough like six times this year. It makes being buried in sand for centuries seem like luxury.”

At press time, The Genie was wistfully thinking of his past masters. “I wish I never ditched that Abu kid in Baghdad, he was actually pretty cool.”