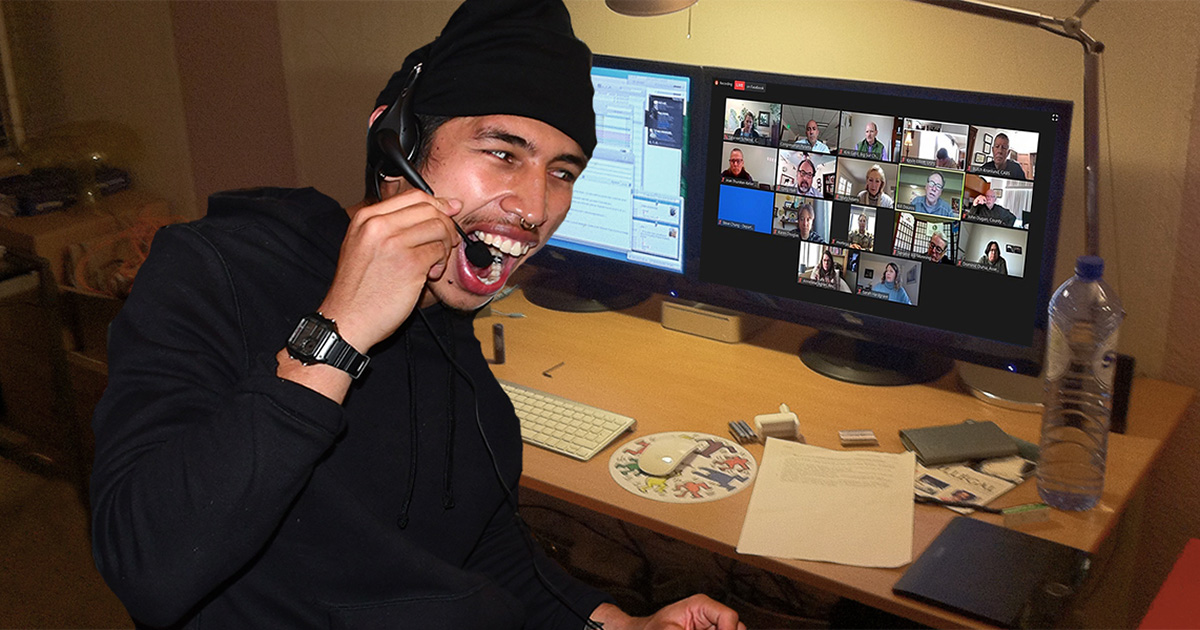 KETTERING, Ohio — Ex-Screamo Frontman Buster Krull was once again reminded that he did not have to lodge his entire headset into his mouth to be heard during a work meeting conducted over Zoom.

“It’s just incredibly distracting,” explained Krull’s supervisor, Bridget Larson. “He’s a great kid, and he does a lot of phenomenal work here at Ambit Customer Solutions, but every single time he speaks during our afternoon meeting it’s unbelievably loud and distorted. Without fail, I pull up his square in the call to find he’s shoved his entire headset in his mouth. In one instance, which I have documented and added to his file, I saw that he had been hanging upside down from a pipe in his basement office for the entirety of the meeting. This is a place of business, not some circus.”

While Krull understood that his professional style isn’t always going to be a good fit for everyone, he still reported frustration over his management team’s attempt to stifle his individuality.

“I had to adjust to be taken seriously as a frontman. I learned quickly in the scene that the only way to get the most out of my voice was to practically inhale my mic. Not only that, it looks cool as fuck,” stated Krull. “In the corporate world, much like the screamo world, you need to do whatever you can to stand out. I choose to accentuate my high-pitched screaming to assert dominance over the entire Zoom sesh. If you ask me, Bridget’s just afraid I’m going to steal her job.”

Behavioral Therapist Laura Derning, who specializes in Ex-Screamo societal reintegration, explained that Krull’s predicament is one that she sees often.

“Often my clients have a lot of trouble differentiating the real world from the youth center stages that once hosted them. I actually had to call an ambulance when one of my patients passed out during a telehealth appointment,” noted Derning. “Turns out they had an AirPod stuck in their windpipe. I’m currently working with a former singer from a heavier band that was just let go from an accounting position for repeatedly typing ‘LET’S OPEN UP THIS MOTHERFUCKING GOOGLE DOC’ into the chat. That doc is restricted to only people with the link, and they knew that.”

At press time, Krull was being asked to turn his camera off before performing spin kicks across his living room.