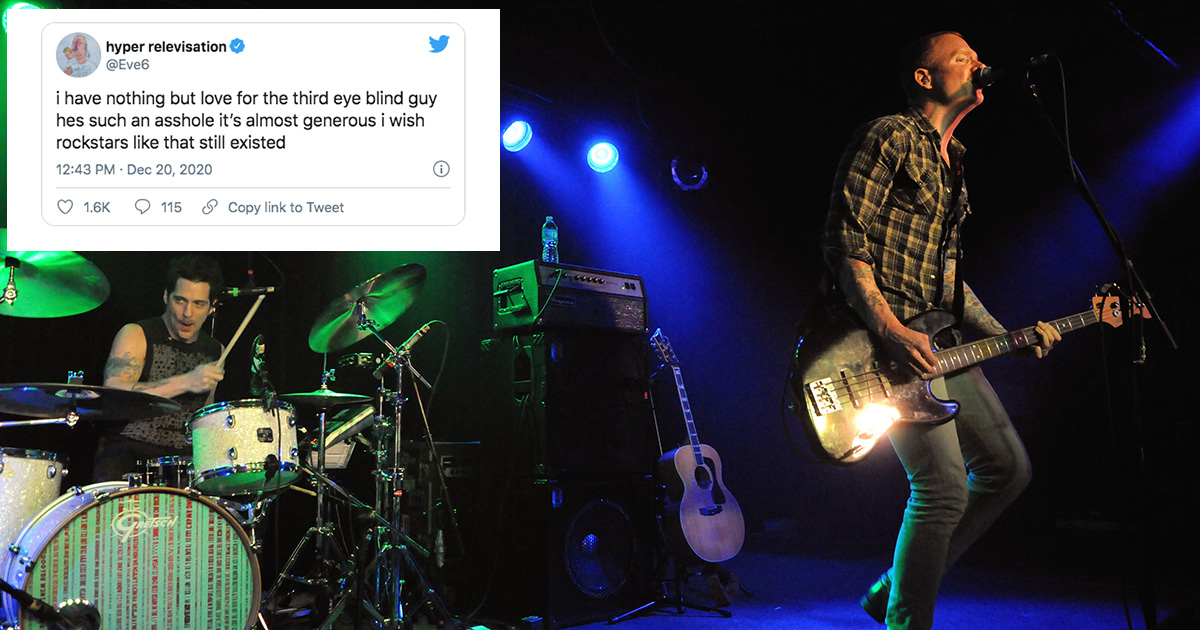 “Idc if u like the band or not but u cant deny that we have more than 1 gud tweet n even if we didnt the acct is still brand new so m.fuckers think we r not still growing as a social media brand,” tweeted Eve 6 lead vocalist Max Collins in response to detractors. “It takes time 2 find ur voice in art and though i admit the tool tweet was fuckn gold we arent sayin were the best at it like were not better then ezra. Keep ur eyes on us u will see the s,ame primo content u get from train and cake. fuck u.”

Twitter users argue that, while the band’s social media presence has been amusing in recent months, they aren’t sure that they have the lasting power of an established social media account.

“I’ll grant that asking Tool if they liked the heart in a blender song was maybe the funniest thing that’s been done since the last Bloodhound Gang video,” said Twitter user Felicia Briggs. “But bands like Trapt and Hinder are easy targets and the rest of their tweets just don’t have the stick-in-your-head-for-the-entire-summer-before-junior-year catchiness of that first shiny burst of self-aware retro irony. It’s a shame, I really thought they’d be an enthusiastic follow for years and years.”

The chatter online has now caught the attention of Twitter executives, leading co-founder and CEO Jack Dorsey to promise to protect users from the hazards of following a flash-in-the-pan account.

“We’re going to be introducing a new AI to the platform, which will detect accounts with single-tweet viral activity and send their personal information right to my phone so I can give them a good once over,” said Dorsey from his hollowed-out volcano. “There won’t be any Dexy Midnights running this platform. It’s a danger to society and national security to allow everyday people to be exposed to an account that gives you one hilarious banger and doesn’t keep delivering the goods. Not gonna happen, not on my watch. You’re welcome.”

At press time, Eve 6 were crafting a perfect takedown of Darius Rucker as Jack Dorsey banned a pro-Refugee account for mentioning guns.