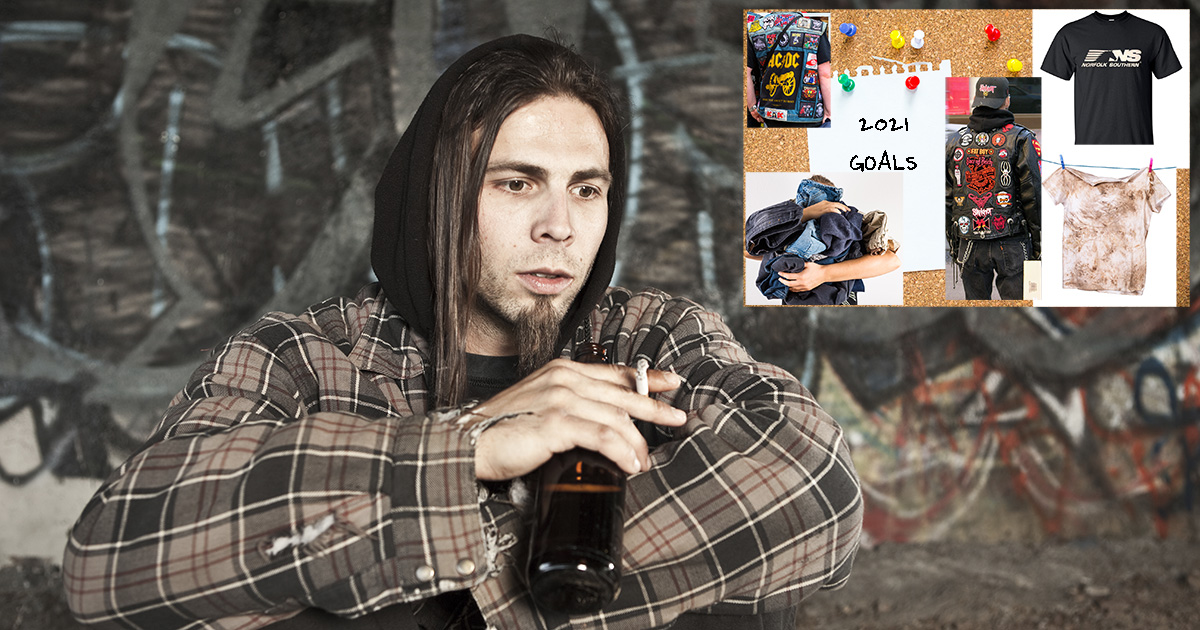 LOUISVILLE, Ky. — Local crust punk Skye Mathtison is leaning hard into self-help culture for 2021, pinning pictures of his deepest desires of the dirtiest clothes possible onto a soggy piece of garbage for his vision board.

“This year sucked absolute dog dick, but that doesn’t mean next year has to,” touted Mathtison before misting his collar with oily drippings from an above gutter. “I believe we’re all in control of our own destiny, and I for one don’t want to be a slave to my own bad habits. Hell, no — I want to break free of them. I want to take control of my life. I want to reach for the moon, because even if I miss, I’ll land among the stars. I’m not ashamed to say this board is packed with great stuff like half-smoked cigarettes, and discarded pizza boxes with some crust still left in there.”

Those closest to the dedicated crustie are embracing his enthusiasm and debating whether or not to join him.

“He’s been going on about goals with fancy words like ‘manifestation,’ which is weird. Not because I don’t believe in him, but because in the nine years I’ve known him, I’ve never heard him speak,” said Mathtison’s friend Snoopy Dundels as he laid down for a nap. “But, I support him — a life with all the stuff he’s trying to get sounds fuckin’ rad: dirtier clothes, bigger hatchet, an older dog. Shit, if I see it works, I’ll have to make me one of those ‘in my wildest fantasy’ dream boards, too.”

Local store owner Mads Bradford believes a stack of self-help books he threw in the dumpster behind his shop helped Mathtison change his outlook.

“He’s been coming in here every day, thanking me for throwing my Tony Robbins bullshit in the rubbish,” laughed the one-eyed corner store clerk. “None of that self-help fakery worked for me, but I’m glad he’s getting something out of it. He told me that his new positive thinking techniques led him to finding a bottle of something he thinks is alcohol. I actually think he’s drinking transmission fluid, but the kid seems happy.”

As a part of his goal setting, Mathtison’s New Year’s resolution is to accept 5% less money from his father every month.