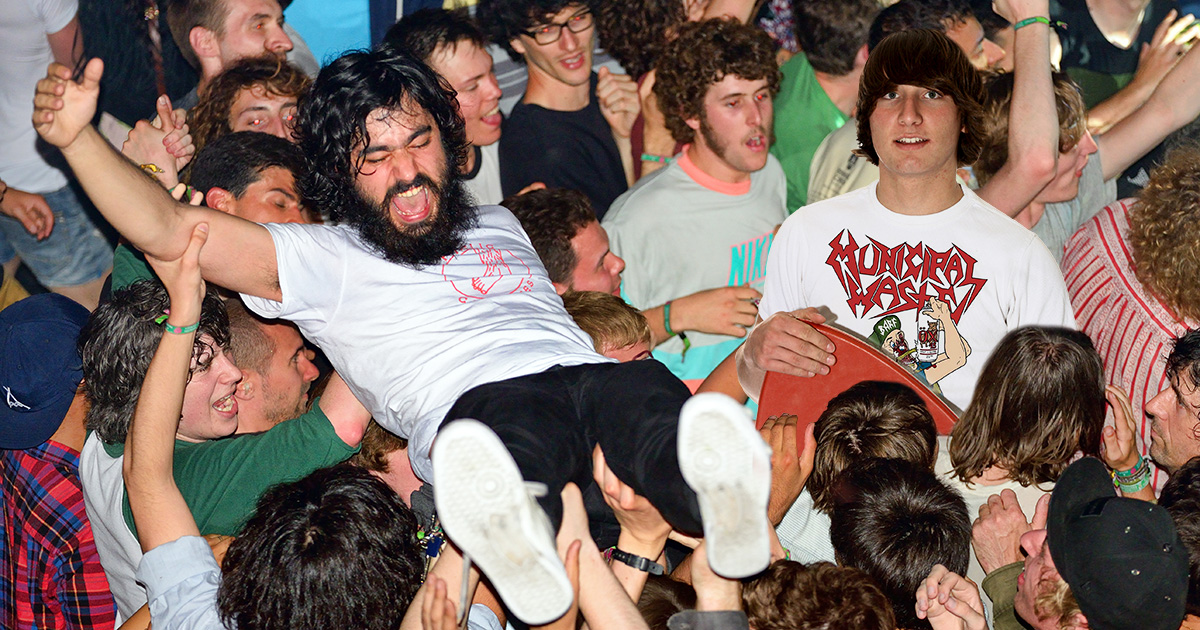 “I don’t know who the fuck that guy thinks he is coming into my local venue and cruising on top of my friends with that stupid fucking pieces of styrofoam,” explained Wang. “These crowd boogie boarders are a bunch of posers that ruin the whole vibe. They always dive during the best parts, they have no pit etiquette, and I want them gone. See this scar? This is from landing on a guy with a spiky jacket at a Pennywise show in 1997. I used to crowd surf every year at the Warped Tour, even after they banned it. Talk to me when you’ve paid your dues!”

Despite receiving a string of insults that included “booger boarder,” “boogie woogie,” and “dickless fuckhead with no friends,” Denton is unfazed and intends to continue his passion.

“He poured a beer on my board, which just rolled right off because it’s waterproof, but it was still pretty mean,” said Denton. “But I love the feeling of crowd boogie boarding and am never going to stop. We spend just as much time on top of people as any surfer. One day we’ll get the respect we deserve! I mean, look at scooter kids. Skaters used to rip on them all the time, and now they just rip on them some of the time. That’s something for us to strive for.”

Marvin Alton, a crowd surfing historian from the University of Southern California, says this is an all too common interaction.

“Crowd surfing is something that takes years to master,” explains Alton. “You have to time the perfect jump, make sure to only crush the people you don’t like, and stick the landing when the crowd carries you down. Crowd boogie-boarding is comparatively easier to pick up, so crowd surfers view them as lesser. However, things get even more tumultuous when you bring in crowd wakeboarders. They ride a full motorboat on top of the crowd. I’ve heard of crowd members getting cut from the spinning rotor blades or who choked on the gas fumes. Suffice to say, everyone hates them.”

As of press time, Wang and Denton have now put aside their differences to mourn a recently deceased crowd-kayaker they both knew who crowd-drowned.