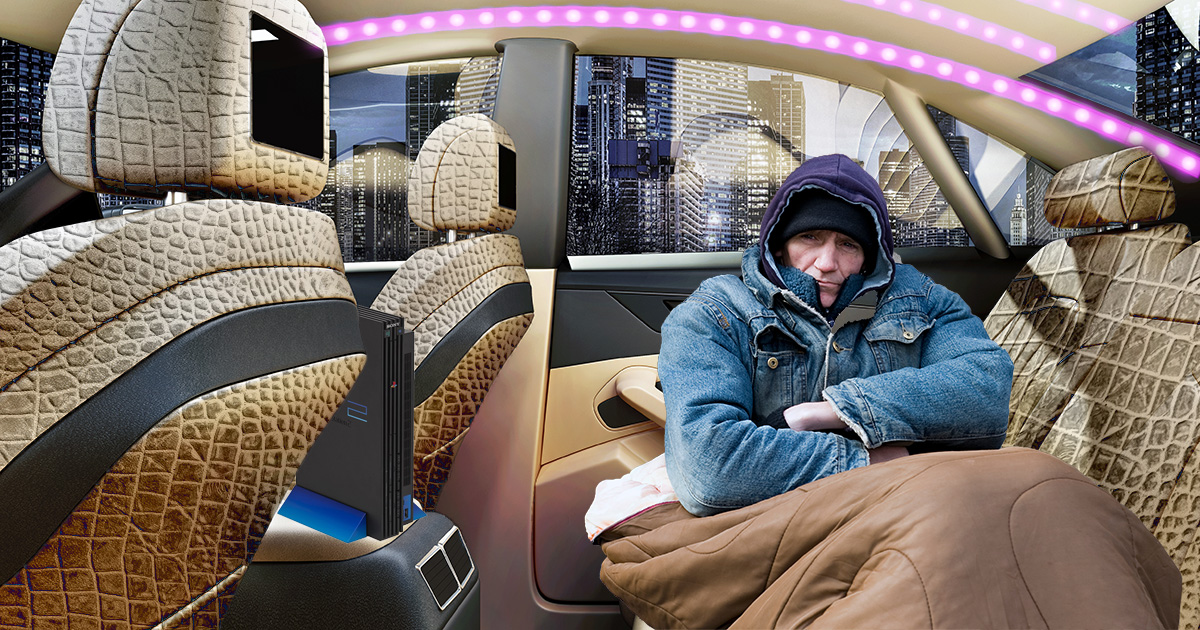 CULVER CITY, Calif. — Former “Pimp My Ride” contestant and man currently living out of “the dopest Civic in SoCal” Russel Burns is begging the team at West Coast Customs to “re-pimp” his current home.

“My ‘92 Honda Civic hatchback was initially selected because I had no floor board on the passenger side, and I needed a screwdriver to turn the ignition. And I’d always wanted to go to Hawaii but could never afford it, so the team at West Coast Customs fixed the car up with a hot tub and blender along with striking tiki upholstery,” said Burns. “But now, I need their help again so I don’t freeze to death this winter. I really could use the upgrade — the hot tub and blender can’t run at the same time. It should be pretty convenient for the team, since they’ve already worked on it.

“Please Xzibit, I need you to pimp my house this time around,” a defeated Burns added, yelling towards a cell phone camera.

Ex-girlfriend Elisabeth Pineda acknowledged that although it’s not the best home, Burns’ ride was “pretty bitchin’” when it was first pimped and used as a car.

“That hot tub Civic was the coolest thing 15 years ago — we used to have so much fun with the karaoke machine, even though on more than one occasion I know people pissed in that tub,” said Pineda. “But that show hasn’t even been on the air for years. How could they help him? At least try hassling like, Jay Leno, or someone from HGTV or something. I don’t think West Coast Customs even exists anymore.”

While MTV does not plan to reboot the show or foot the bill for Burns’ vehicle re-pimping, it has not stopped his eager letters & emails to former “Pimp My Ride” host Xzibit.

“That guy Robert or whatever has been hanging outside my house in that car for weeks. I don’t even remember him,” claimed Xzibit. “If you listen closely enough, you can hear him yell, ‘X, I need you to Pimp My Ride again.’ I’m calling up my lawyer to get a restraining order against this motherfucker. I have a wife and kids, and they’re afraid this man might hurt them.”

Reports indicate Burns may settle for a spare tire on the rear passenger side of his home, so he can move it and avoid getting another ticket.