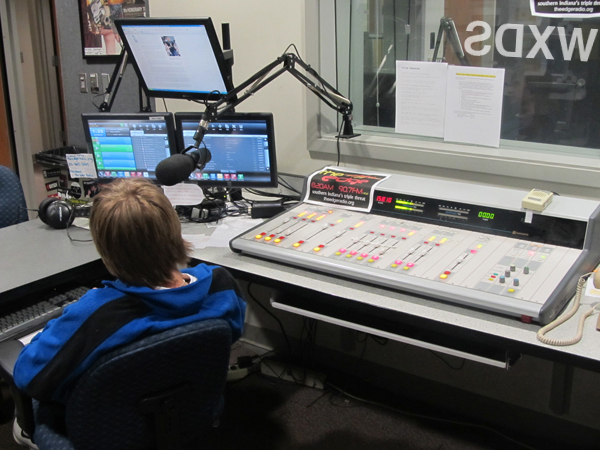 WXDS recently had to shut down the Internet broadcast of the station after this spring’s pledge drive raised just $16, which failed to cover the site’s hosting fees.

Drive time DJ Kenny “K-Bird” Yost hasn’t let that number discourage him. “The lobby is great. I think it’s the only room on campus that still has ashtrays built in. The campus has been smoke free since 2005, so you’d figure they’d be gone by now – but, nope, there are five,” Yost said.

“It’s a big change, but it’s one we’re really excited about,” station manager Kelly Stipe said from the tiny station lobby, a room that now encompasses the total broadcast range of the station. “This is it. It’s just going to be in here and maybe, on a clear day with all the doors open, three or four feet into the hallway.”

Mike Davis, faculty advisor to WXDS, also believes this is a positive move for the station that once boasted 2.5 kilowatts of power. “Well, we sold our FM signal in 2009 to raise money for the football team and some people weren’t pleased with that. But now our fans know they can tune in 24 hours a day, seven days a week. They will just have to walk to the basement of Ramsey Hall and hang around in a damp, poorly lit room – every inch of which is covered in decades of pizza grease,” Davis said.

Related: Merch Guy Puts Off School, Family to Pursue Dream of Tagging Along

Despite Davis’ excitement, the new format is not without its critics. Long time WXDS listener Carly Birch isn’t happy about the move.

“Look, I love being able to hear awkward, poorly produced content. 45 minutes of Captain Beefheart rarities at 2 p.m. with one studio mic accidentally left on? That’s great, but some of these newer DJs play the same stuff I can hear on corporate radio. I’m not going to hang around in a room that really, really reeks of light beer farts to listen to Bruno Mars,” Birch said.