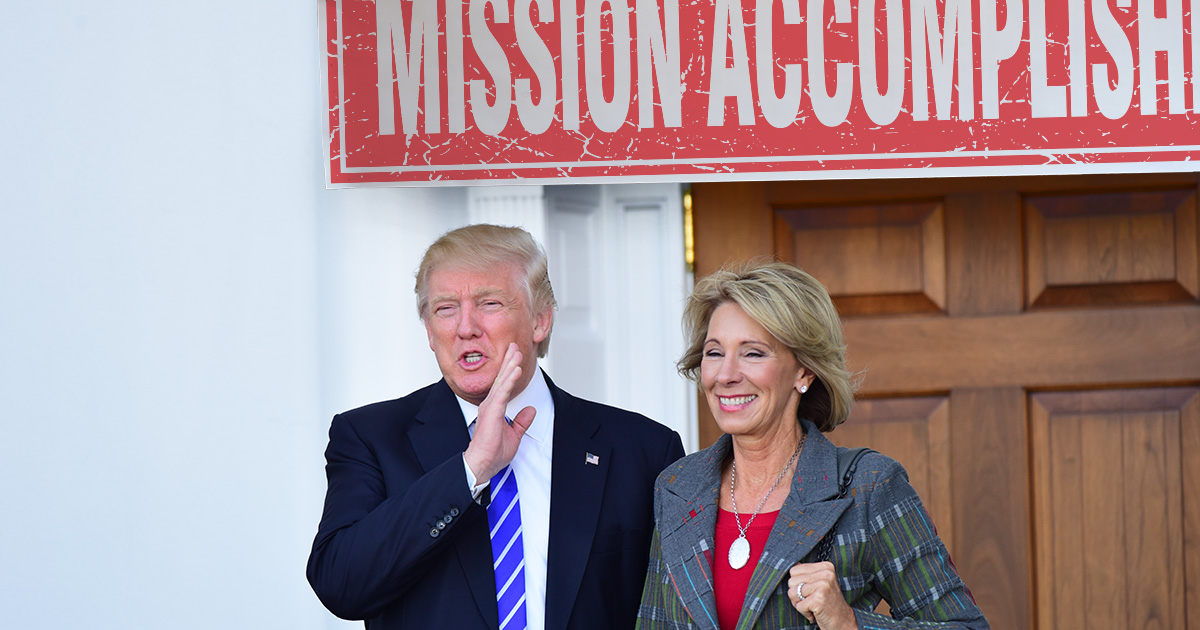 WASHINGTON — Secretary of Education Betsy DeVos stood triumphantly beneath a “Mission Accomplished” banner in an empty cafetorium yesterday after the coronavirus allowed her to completely shut down the U.S. public education system.

“I’ve been waiting for this day since I was sworn in as Secretary of Education. Hard work and dedication pay off,” said a beaming DeVos. “I believe that the best governments govern the least, so as far as I’m concerned, this country’s schools are doing an incredible job. It’s basic civics — you know, the kind you shouldn’t be able to learn for free.”

“COVID-19 has been a literal god send. I spent many nights praying for answers, and then this was sent to me,” said DeVos. “All the millions of dollars promoting voucher programs were nothing compared to this. When I proposed budget cuts, I was thinking too small: this pandemic was the solution to public education.”

“These buildings would make great prisons. Some of the water fountains and toilets are too low for adults, but we would probably remove those anyway,” said Sen. Cory Gardner. “Or maybe factories — I’ve been a champion of bringing industry back to American soil, and whatever children survive this will need something to do after the pandemic ends. There’s no such thing as a free lunch: not since we shut down the cafeterias that feed millions of American kids.”

One quarantined classroom teacher in Kansas admitted that she grudgingly respects DeVos.

“I definitely don’t like her. I mean, she tried to cut funding for the Special Olympics. Who does that? But she’s not as incompetent as I thought,” said local teacher Carrie Bick. “I mean, she set out to destroy public schools, and now they’re all closed. It’s one for the history books—you know, the kind they’ll teach someday in for-profit private schools.”

Insider Washington sources report that DeVos has been inquiring about how she could be used to help destroy the Department of Health and Human Services.