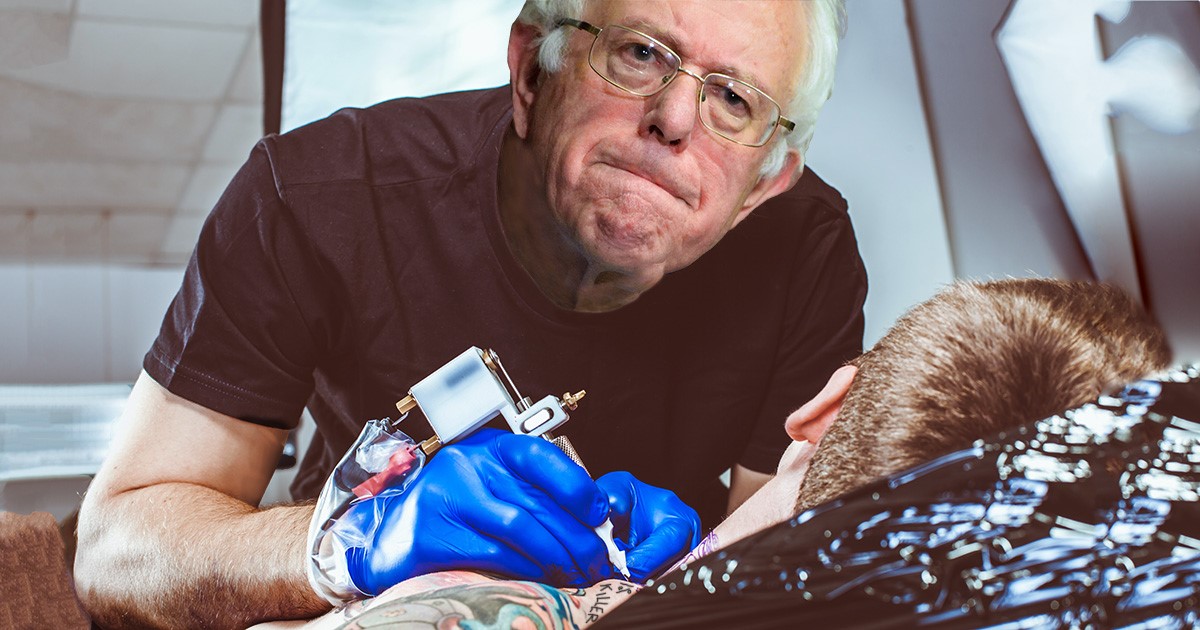 “Man, Bernie’s really come a long way. I remember when he rolled through here back in 2016 and was doing stick-and-pokes of just like, crescent moons and smiley faces — real amateur shit,” explained Deandra Goodrich, showing off a “99%” tattoo she got from Sanders that has since faded into two misshapen S’s. “This time, my dude showed up with a real tattoo machine, plus latex gloves and everything. He’s not fucking around.”

Sanders reportedly settled on the “1% Killer” design after fumbling through countless attempts at memorializing a six minute-long speech he gave in 2002 opposing the Iraq War, which yielded several complaints.

“He said he had an idea for a cool freehand design, and I was pretty baked at the time, so I told him to just go ham,” said Akron, Ohio resident Makenzie Fischer. “But he was doodling around for like, seven hours — that thing covers by entire back and most of my butt. Plus, there are at least three typos I can see, and probably more I can’t.”

“Overall, though, I’m still down with Bernie, so no hard feelings. I’m gonna see if he can cover it up with a mural of Vermont and like, some moose or something next time he visits,” she added.

Despite his redemption, however, some housemates were not thrilled to host the presidential hopeful in their home.

“Man, I know everyone likes that guy… but you try dealing with a kitchen full of drunk people when you’re just trying to heat up a frozen lasagna after a 10-hour shift,” said house tenant and only person currently on the lease, Tommy Laemp. “If I have to put up with one more 70-something-year-old white dude coming in here and giving free tattoos about class warfare to anyone who wants them, I’m gonna lose my shit, for real.”

At press time, Sanders was removing two cone-shaped pieces of Scupli from a heated oven to help gauge a voter’s ears.