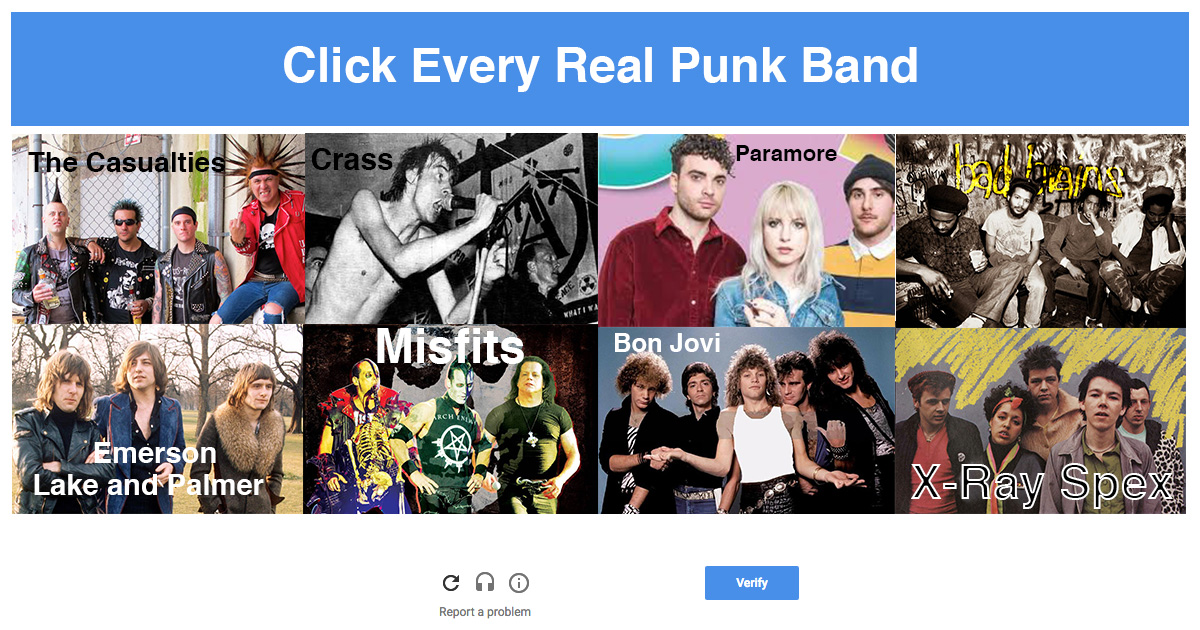 “He was trying to buy tickets to the Swingin’ Utters show,” said Kate Fuentes, a bartender and Graham’s roommate. “I was leaving for my shift when he called me over to help him figure out ‘why this thing doesn’t think AFI is punk.’ I told him it was a photo from 2016, but he didn’t seem to get it.”

“On Sunday, I tried to open a new email account so I could get a discounted subscription to Kerrang,” Graham admitted, heavy with indignation. “And I clicked Fall Out Boy on the captcha, which I guess was wrong. I also selected what I thought was that band the Adicts, but my sister said it was just a still from This is England.”

“We wanted to create a stronger captcha that only a true punk could easily pass. Much like machines, posers lack the sophistication it takes to holistically process visual information,” said Choi. “We’re currently working on an aural version, so the visually-impaired punk community can also better protect their information.”

Once locked out of the Eventbrite website, Graham allegedly searched for a message board to find answers to these “punishingly difficult” captchas.

“I figured the /r/PopPunkers subreddit would be filled with people who experienced the same issues,” Graham said. “But before I could sign up for a Reddit account, the same goddamned captcha showed me a bunch of pictures of totally indistinguishable bands. Like, one had a frontman wearing big, dorky glasses and a blank T-shirt. How is that punk?”

At press time, an anonymous source reported that Graham had given up on the concert tickets, and was instead planning to join Marvel Unlimited to start “getting into comics.” This effort, too, was allegedly stymied when a captcha asked Graham to ‘select all original ‘Guardians of the Galaxy.’