The Worst! Steve Bannon Is in My Improv 101 Class and He’s Horrible at Accents 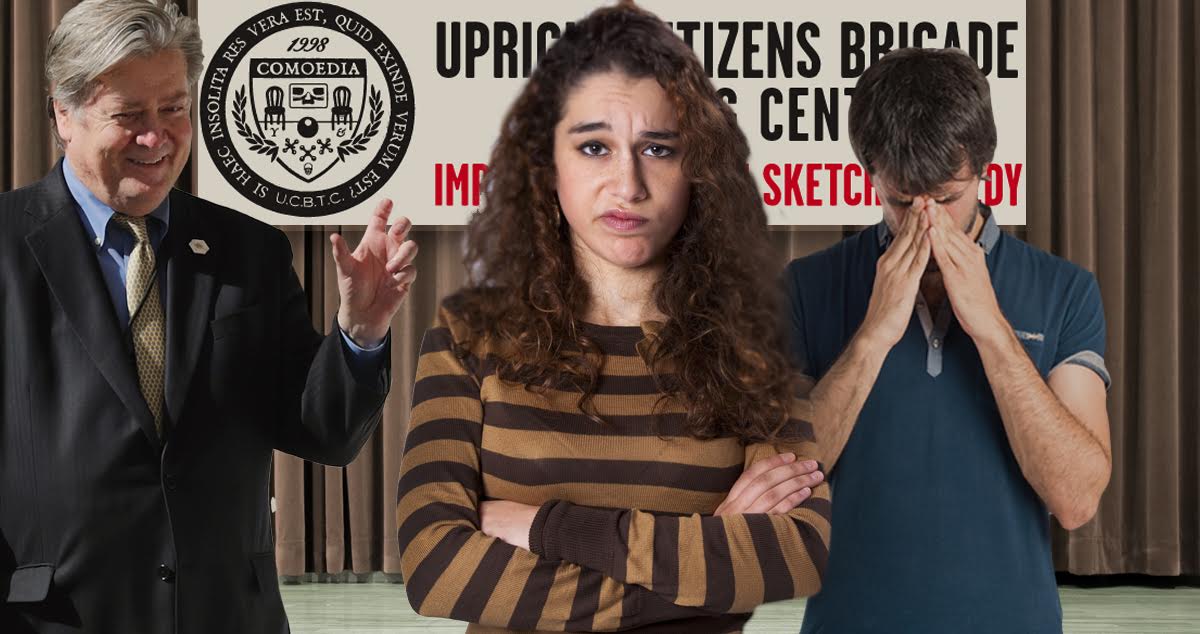 This summer I quit my job and moved to New York City. I love comedy and wanted to get out of my comfort zone and try new things so I signed up for an improv 101 class. Oh, but wait, look who else is newly unemployed looking to shake things up in his life, Steve Bannon. Yea, THAT Steve Bannon. Every improv class has “that guy”, and he was definitely ours… The worst!

It started off pretty OK. We did an exercise where you make an alliteration with your name, like Boisterous Bobby, or Funny Phoebe. He went with Silly Steve and did a “crazy arms” thing. It made us all laugh and for a minute there I thought he might be an alright dude… Jeepers, what was I thinking?!

Then came the accents. When we started doing scenes he would constantly do offensive caricature accents and voices. What was really weird about it though was that he was actually really good at improv. You know, aside from the racist stuff.

In improv, there’s this thing called “the game.” The game of the scene is the main weird thing that drives the scene. Bannon was brilliant at quickly identifying the game, making it clear, and then taking it to new places and developing it. Even more important, his racist accents and characters were never” the game” of his scenes. It’s like he would do these brilliant improv scenes that also happened to be super racist.

For instance, the suggestion for one scene was “hood.” Right from the start everyone in the room had the same thought: Are you insane?! Steve Bannon is in this class! Hood?! So he walks out and initiates the scene by singing one of the songs they sing in “12 Years A Slave,” and complimenting his scene partner on her “perfectly clean and pointed white hood.”

Bannon went on to define the scene further as being about working for a KKK laundry service. The entire scene became about a Klanswoman going to a new place to dry clean her outfit. Aside from the stereotypical accents, racist rhetoric throughout, and 30-second monologue in the middle of the scene about the positives of slavery (which was mind-blowingly offensive), it was actually pretty funny. And at its core the scene was about a guy confronting a seemingly loyal customer for taking their business elsewhere. Despite how racist it was it was actually a really great improv scene… Fuck, did I just compliment Steve Bannon?!

In the end I learned a lot, made 15 new friends, and watched an old white dude drop the n-bomb like 90 times. Not the worst way to spend the summer!