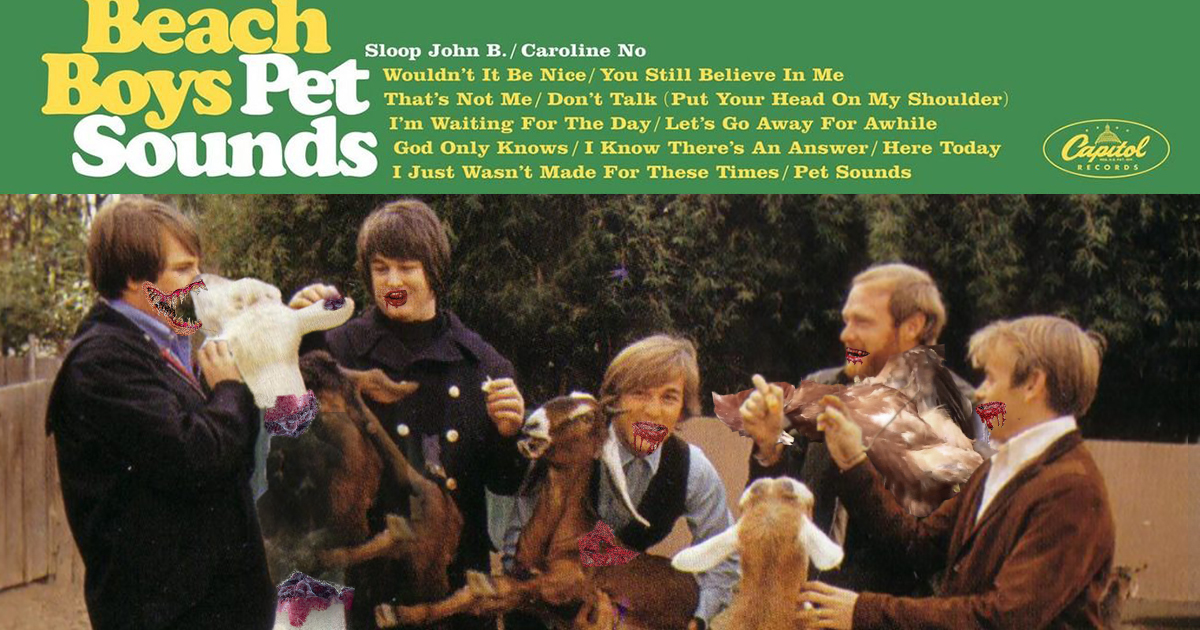 The mid-1960s were an exciting time in rock. Bands were gradually shifting from throwing together a few hits and a handful of fillers every 9 months, to thinking in terms of a cohesive musical whole: the album.

This was the era that gave us “Pet Sounds” by The Beach Boys. A record which wasn’t supposed to be twelve perfect pop songs about love and the loss of youthful innocence, but a concept album about killing goats. Recently, we were given a rare opportunity to look at the original, rejected artwork.

Damn, this is graphic. There is so much blood! And what’s Dennis doing with that goat’s head? That is disgusting! Man, we can never look at Mike Love in quite the same way after this. WTF.

The photo we’re looking at is a test print. The idea was that the album sleeve would be a “before and after”, with the front (before) being the cover that we all know, with the boys feeding the goats, and the back (after) would be the ultra-graphic snuff version where they’ve killed the goats and are eating their flesh and guts like a pride of hungry lions. And yeah, it’s quite something.

Capitol Records wouldn’t have it. They also forced Wilson to change the lyrics and titles to some of the songs. Rumor has it that was the reason he brought jingle writer Tony Asher onboard as a lyricist in the first place.

Some early titles for songs that eventually ended up on “Pet Sounds:”

The goat cover serves as a great example of artistic vision clashing with commercial interests. The whole experience was so painful for Brian Wilson, he still answers interview questions about it by pointing at the reporter like Donald Sutherland in “Invasion of the Body Snatchers,” and screaming “Baa! Baa!”.