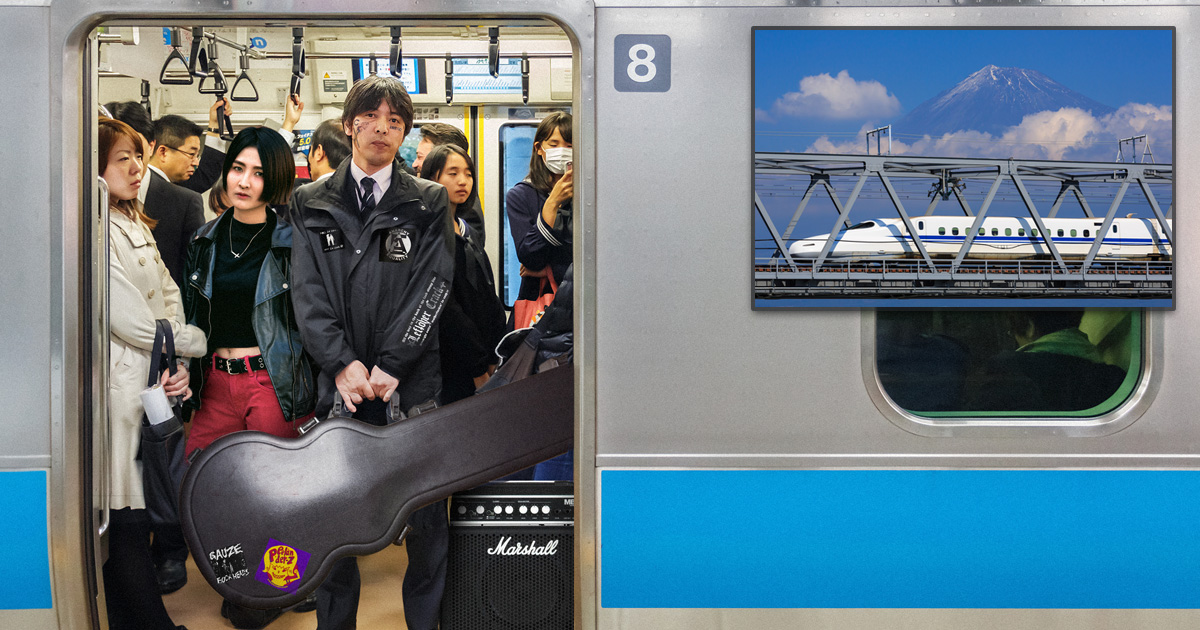 Freighthopping, commonly known in punk circles as ‘train hopping,’ is the act of stealthily boarding a train and riding it to new destinations. While the act was made popular by the traveling American hobos of the early 1900’s, it is now a worldwide rite of passage for anarchists, nomads, and vagrants hoping to travel on the cheap.

It’s also been a popular way for folk-punk musicians to get from one city to the next, busking and gigging with their ramshackle acoustic instruments along the way. However, there is one folk-punk band taking railway travel in a different direction.

Meet Railrocket, a Tokyo-based trio who travel from show to show using their country’s famous Shinkansen. The high-speed rail line (known colloquially in English as the “bullet train”) debuted in 1964 and has since transported over 10 billion passengers across the country. “It’s made touring so easy,” says frontman Tajima Shinzo. “I no longer have to worry about catching bedbugs from a crust punk or dropping my guitar off the side.”

The band used to sneak onto Japan’s freight trains but their washboard player Hatake Kenjiro broke his foot attempting to board a moving railcar in 2016. They switched to the Shinkansen shortly thereafter and it fully revolutionized the way they toured. “It goes so fast, sometimes we can play two or three shows in one day if we time it right,” Hatake told me. “The ticket is a bit expensive, but being able to play eight shows in a weekend freed us up to get day jobs!”

Their love of the bullet train has notably influenced Tajima’s lyrics. Some English translations of their song titles include “Three Hundred Miles Per Hour,” “Speeding Bullet to Kyoto,” and “1435mm Standard-Gauge Track With Welded Rails to Reduce Vibration.”

The train’s high-tech pedigree has also inspired the group make other updates to their folk-punk lifestyle. They’ve bought electric instruments, made their busking e-transfer-only, and when their dog Isamu passed away, they had his consciousness uploaded to a digital avatar that they keep with them on a tablet.

Although the band is evolving, the group is quick to assert that they haven’t lost their edge. “Fuck the government!” shouted Tajima as we concluded our interview. “With the exception of its groundbreaking transport sector!”