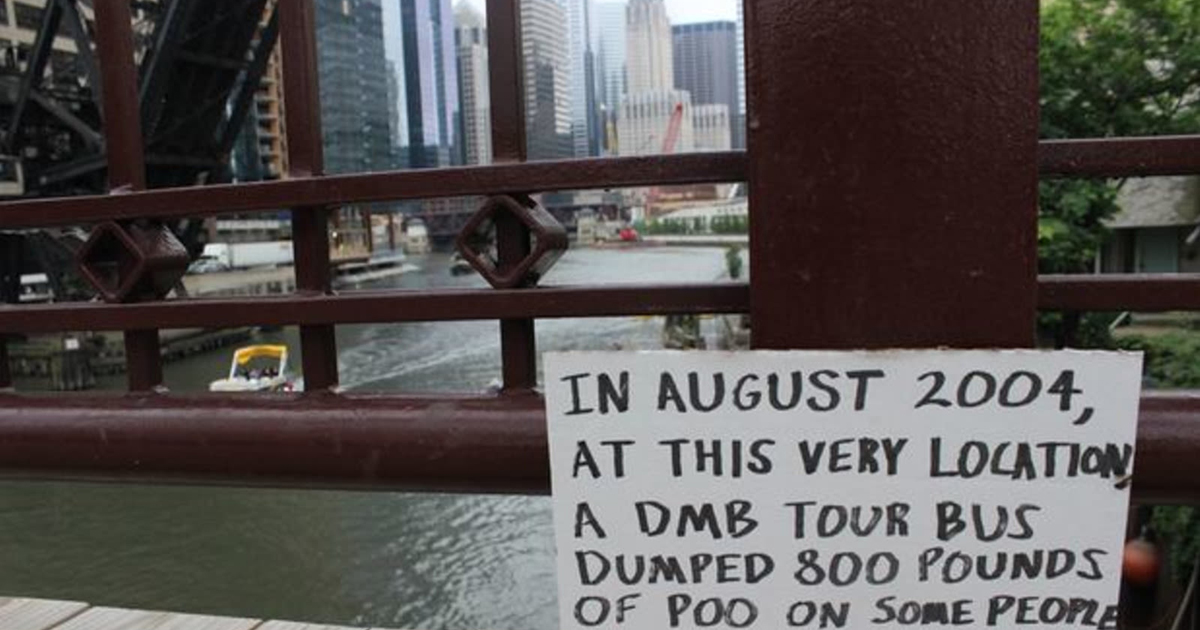 August 8, 2004 has found itself an unlikely little corner in rock history. For fans and critics alike of The Dave Matthews Band, the events of that fateful day in Chicago, Illinois still prove to be the folk/rock/jazz fusion jam band’s most enduring artistic contribution.

That day, 800 pounds of human waste was released from the septic tank of one of the group’s tour buses, rushed through the platform grille of Downtown’s Kinzie Street Bridge and into the Chicago River below. There, it tragically met a group of unsuspecting tourists crossing in a tour vessel. Following waves of ridicule and scorn, along with $300,000 paid in settlement fees, the band reached the other side of this nauseating accident with a new legacy tied to the initialism “DMB” – one that endures to this day.

Michael Nabors – local Chicago record store clerk
When I first heard Dave Matthews Band had unloaded 800 pounds of shit on Chicago, I just thought that was a really weird way to say “they played all the hits.” Thankfully, it was only slightly worse than I’d imagined.

Hugh Baker – music critic, Chicago Daily Herald
Stronger than any effort that predates or follows it, the stench of 800 pounds of human waste will linger for ages – carrying with it the enduring legacy of the Charlottesville group.

Maria Reynolds – victim
The moment we were struck, all I remember is a blur of brown and yellow, then everything going dark and silent. That silence still lives with me.

Jeff Helwig – fan/victim
Don’t get me wrong, it was awful. I was sick as a dog, my car’s interior was ruined, I burned my clothes, and took so many showers – but when I found out it was Dave’s bus, I’ll admit I was a bit starstruck. “Before These Crowded Streets” is one of my favorite records. Shortly thereafter, I found out it really came from (former violinist) Boyd Tinsley’s bus – I was still OKAY with it, but it was definitely NOT as cool.

Toby Flemming – victim
I used to love the smell of human shit. Now, I hate it. Thanks a lot Dave.

Well, we can’t wait to see what Dave and the boys have cooked up for the big 20th anniversary. Like those lone anonymous homemade historical markers placed on the Kinzie Street Bridge read: #NeverForget, #AlwaysRemember.