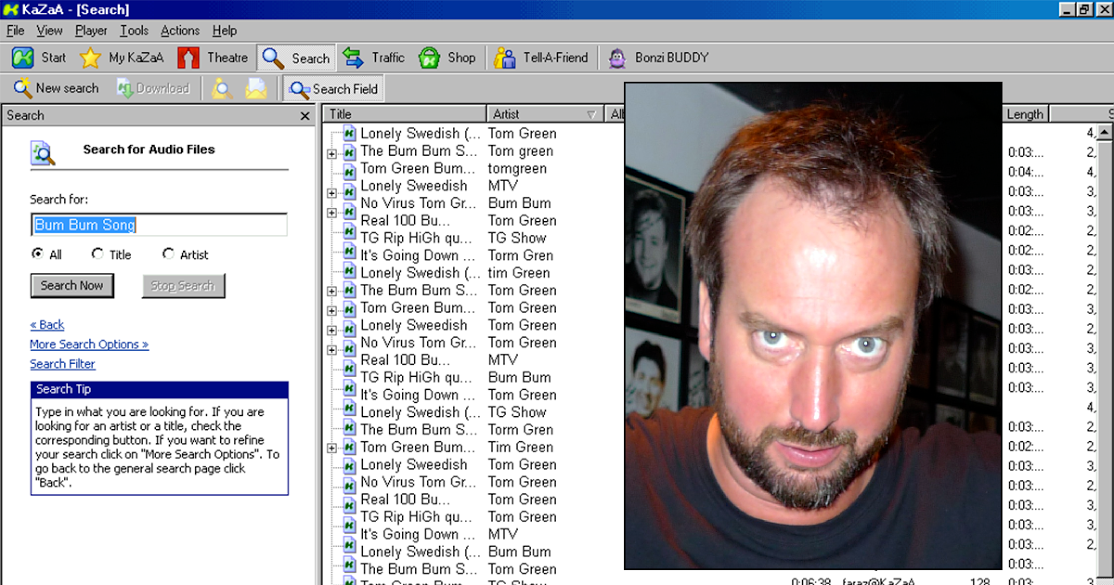 Ready for that nostalgia to hit? Comedian Tom Green released his famous single, “Lonely Swedish (The Bum Bum Song)” all the way back in 1999. That means The Bum Bum Song is old enough to have voted for Donald Trump in last year’s election!

If your memory needs jogging, the song featured Green rubbing his butt on stuff to lyrics like, “I like to put my bum on things / It’s fun for everyone,” and, “Bum is on the cheese / If I get lucky I’ll get a disease.” The single developed a cult following and even made it to #1 on MTV’s Total Request Live.

We can see why!

A spike of millennials have been seeking out the song in recent months, only to hit a roadblock. It turns out The Bum Bum Song is hard to find through normal channels. It’s not available for purchase or streaming on any major services. So those crafty song seekers are getting ahold of it the same way they did back in early 2000s:

“It’s a great song,” said Dustin Cho, a 29-year-old L.A. resident. “Every time Tom sings that his bum is on the Swedish, it’s a portal back to a simpler time when boy bands ruled the airwaves and Al Gore was going to be president. I remember back in the day I downloaded Kazaa onto my mom’s computer to snag a copy.” Dustin claims Kazaa gave him a virus that deleted all his mom’s work documents, but it was totes worth it. We agree Dustin!

Dustin recently reinstalled Kazaa to download the nearly two decade old classic track. “The program is safer now than it used to be,” he claimed. “Still tons of viruses on there, but most of them only work on Windows XP or earlier.”

Misty Rogers, a 31-year-old Tom Green fan, found the song on Kazaa after only three attempts.

“The first song I downloaded was labeled ‘The Bum Bum Song’ but was actually ‘Mambo Number 5’. The second was something called, ‘conficker virus’ even though it said ‘100% NO virus’ in the title,” said Misty. “The third try, I got the legit, ‘Lonely Swedish.’ I miss Tom Green.  It’s so sad he’s dead.”

When asked about demand for his old hit, Tom Green told Hard Style, “I’m not dead. Also, I think you can just watch the video on YouTube.”