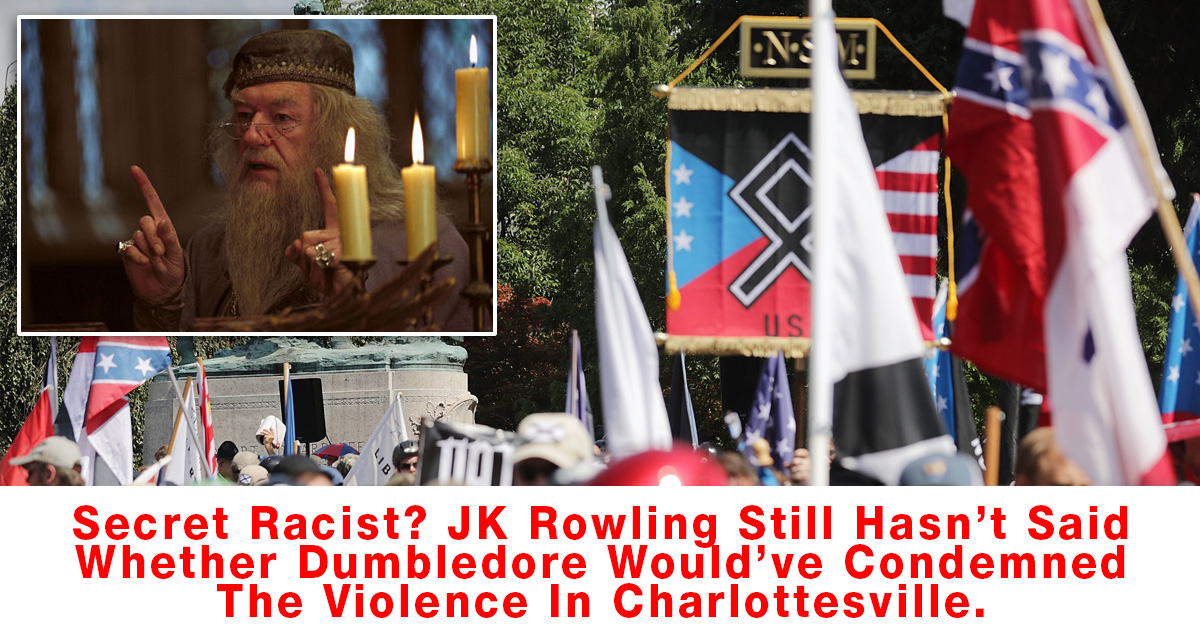 The figurative dust has not yet settled on Charlottesville, Virginia, where Heather Heyer, a counter-protester to an evil white supremacist march, was tragically murdered by a hateful coward. This action and the intended actions of all such groups make it clear: there are no sides to this issue. Hate speech like that uttered by neo-Nazis incites unacceptable and unforgivable violence towards minorities. The idea of white supremacy needs to die and those who do not voice their intolerance of it implicitly accept it.

So why hasn’t JK Rowling said whether Dumbledore would’ve condemned the violence in Charlottesville? Is it because he is a secret racist?

JK Rowling has been no stranger to publishing shocking facts about the characters of the Harry Potter universe long after the completion of her epic series. After much pressing from fans, Rowling revealed the houses of Teddy Lupin and James Potter (Hufflepuff and Gryffindor), she informed the world we’ve been pronouncing Voldemort’s name wrong (the ‘t’ is silent), and perhaps her most famous reveal that Dumbledore was a proud gay man.

And yet, JK Rowling denies informing us whether the dead, homosexual, former Headmaster of Hogwarts is for or against white supremacy. What gives?

Her silence on the matter is unsettling. Why? Because Dumbledore was one of the greatest wizards to have ever lived! And he was presented in the books as a steward for equality who actively extinguished the forces of darkness. He singlehandedly defeated the evil wizard, Gellart Grindelwald, thereby putting an end to the Global Wizarding War. He also formed the Order of the Phoenix to combat Voldemort and his ethnic cleansing of Death Eaters, who let’s be honest, were wizard Nazis. Simply put, the facts of Dumbledore’s history would easily lead one to assume he is, in fact, not a racist at all. Sadly, until JK Rowling tells us otherwise, he easily could be.

If Dumbledore is proven to be a racist it would be a crushing blow to every morally sound fan of Harry Potter, and would doubtless be a boon for pissant Nazi fucks everywhere. The world’s most beloved half-moon-spectacled, wise, intelligent, caring, Pensieve-using wizard in history should never evoke imagery of swastikas, concentration camps, and Hitler. But unless JK Rowling tells us that Albus Percival Wulfric Brian Dumbledore thinks violent, racist ideologies are a plague which need to be expunged from the face of the earth, we are forced to conclude that he was the biggest sleeper cell agent in history, and was a huge, unabashed racist.

As America grapples with a very real, very dangerous white supremacist threat, we must unite to promote peace, prosperity, and egalitarianism through the public condemnation of those who hate. Together we can fight to cut the head off the beast of oppression now and forever. But we also must ask: Will JK Rowling tell us what side Dumbledore would be fighting on? And would it be on the good side?

But you never know.