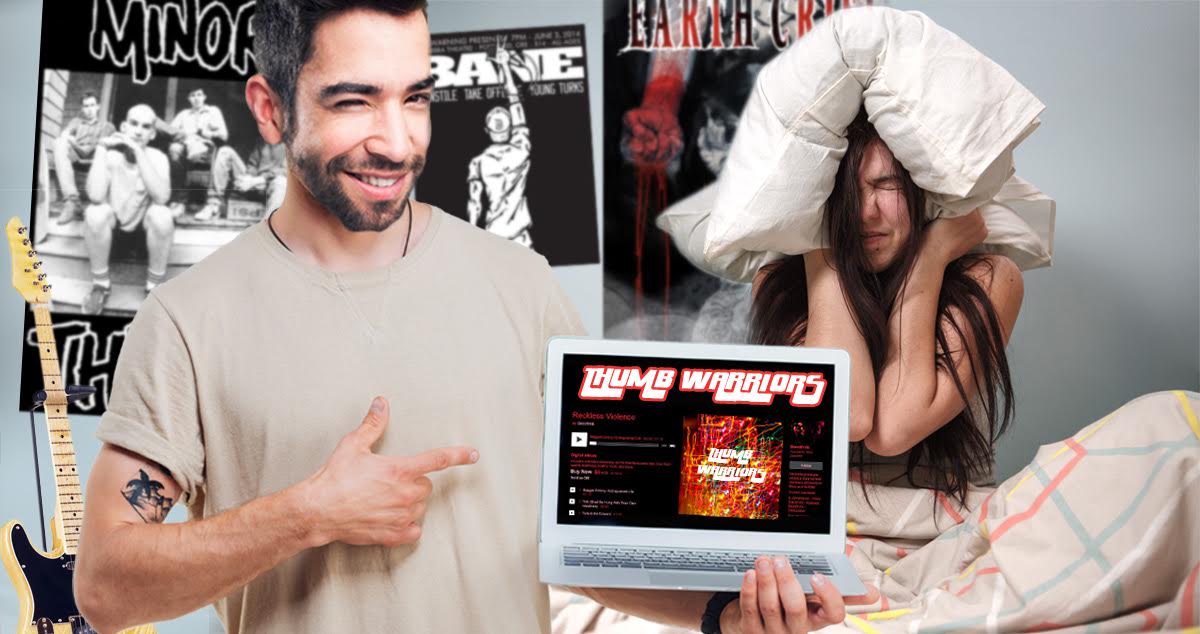 We’ve all been there. You meet a guy, his skinny jeans are black, his low tops are black, everything he’s wearing is black, and we get it. Somehow he finds time to take you out between his multitude of band practices. The date is going pretty well so you decide to go back to his place. He introduces you to his seven roommates in a starkly lit kitchen and you make your way down a hallway into a bedroom that could be generously described as a walk-in closet. He invites you to take a seat on his futon and opens his laptop to set the mood.

Not the mood you were hoping for though, because rather than iTunes or Spotify, to your horror, you can see he’s pulled up Bandcamp. As the words, “I wanna show you something,” leave his lips, you are left with only one option: Fake your own death.

Here are the five best ways to fake your own death before you are forced to listen to this goof’s demo.

This classic is nearly fool proof when done correctly. Unlike his garbage powerviolence band, it’s all about timing. The key to success is to already have the hot embers smoldering in your purse before he begins explaining his band’s influences to you. That way by the time the first chug chug riff kicks in, the hay bale with your hoodie on it will be fully in flames and you will have slipped out the back. It’s important to note that he and his seven roommates may actually die in this fire, which is why this is our most preferred method.

2. Choke on your own vomit

Countless iconic musicians have died choking on their own vomit, but the numbers are still not in as to how many innocent bystanders have met the same fate because of deeply unfamous musicians’ music. Don’t become a statistic. Fake it ’til you make it out of there. However, the vomit itself won’t have to be fake, because that stuff will come bubbling up naturally the second he tells you his band’s name is Thumb Warriors.

It is absolutely vital that this move is not misinterpreted as an emotional reaction to the “rawness” of Thumb Warriors or Hacksaw Holocaust’s sound. The hand-to-chest clutch can be very easily misunderstood and you don’t have the luxury of being able to fuck it up right now. ONLY ATTEMPT THIS MANEUVER IF YOU ARE ABSOLUTELY SURE YOU WILL NAIL IT. If you pull this off correctly you’ll be in the ambulance explaining your situation to the EMTs before he even has a chance to tell you what inspired the album art. Don’t feel guilty about using emergency services for a fake heart attack. Nothing could possibly be more urgent than dodging his eager eye contact as he clicks play on his solo pop punk side project.

4. Jump out the window

This is only an option for the privileged few who find themselves in this situation in a bedroom that even has a window.

Finally! A chance to put your trained pet boar Kids Like Tusk to use. He’s not a service animal for nothing. He was born to help you out of this exact situation. Let your boar be a boar (they’re smarter than dogs you know). Get that boar to fake attack you, fake kill you, and drag your fake dead body out of that apartment. Better to listen to the legitimate pig squeals of a rampaging boar than the imitation pig squeals of a 31-year-old art school dropout grindcore “vocalist”.