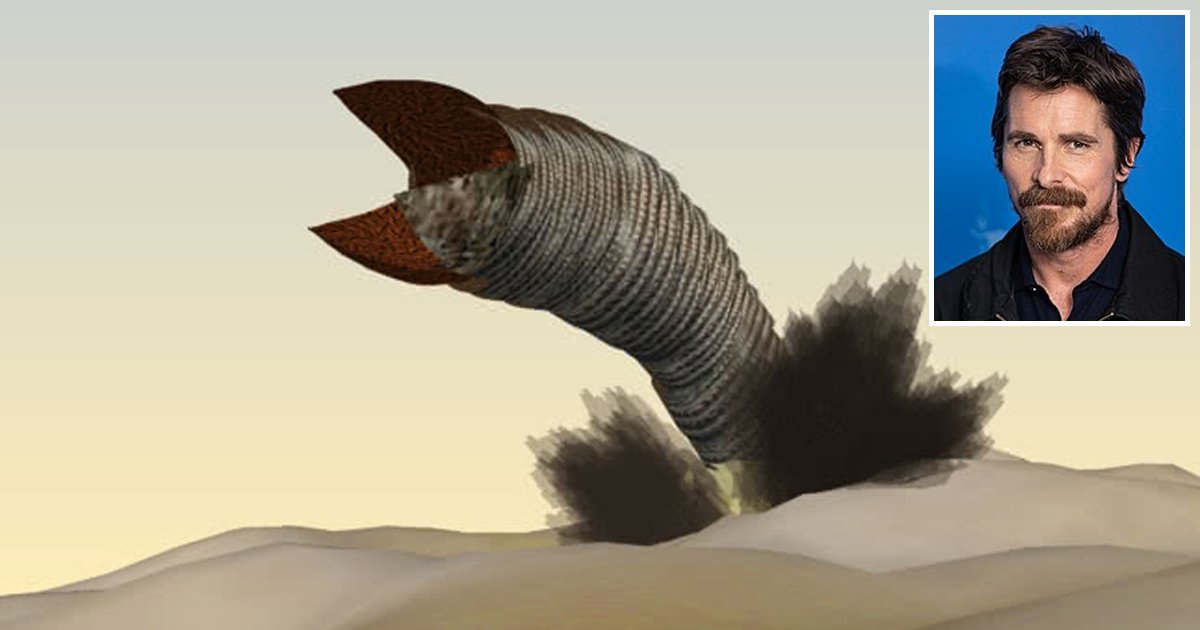 TUNIS, Tunisia — Christian Bale, an actor known for dramatic transformations, has gained over 450,000 pounds to play a sandworm in the upcoming Dune remake.

Bale’s extreme commitment to the role was first seen in the Tunisian desert as the now bulbous, whale-sized Academy Award winner was airlifted to set.

“People like to call me a method actor, but I’m just a guy doing a job,” said Bale while swallowing entire chickens whole so he could reach his 480-million-calorie goal for the day. “During pre-production, Denis [Villeneuve] and I were both in agreement — the only way to accurately portray this nuanced character was to increase my body weight by over 249,000 percent. I haven’t seen my feet or enjoyed a single pleasant, pain-free moment in months, but that’s part of the gig.”

Bale went on to say a CGI sand worm, or “Shai-Hulud” as they are sometimes called in the film, would have looked fake and unconvincing to audiences. Spending six hours a day getting makeup and prosthetics every morning was also not an option due to Bale’s sensitive skin.

“He’s too modest,” said director Denis Villeneuve, rolling just in time to avoid being crushed by Bale’s blubbery thigh. “Christian is a true thespian. He’s never messed up his one line, a guttural growl I’ll hear in my nightmares until death takes me, and he’s never late to set. Even better, he’s always polite to the helicopter pilots who carry his Lovecraftian sea of flesh to and from the converted warehouse we store him in. Consummate professional.”

Villeneuve then rushed off to help free a production assistant who’d been trapped between Bale’s fourth and fifth chins.

“He’s a star, baby,” said Bale’s agent, Greg Tucker. “When I saw his frail, starved character in The Machinist, I knew I had to rep this guy and make as much money as possible before his body gave out. Yeah, this is just another day at the office for my boy. While it may look like he’s suffering from heat stroke rolling around in the desert or that his very existence is an unending hellscape, just know that he lives for this.”

While Bale is known for wildly fluctuating from one body transformation to the next, he says he may keep the weight on for a while as he continues discussions with J.J. Abrams to play a Star Destroyer in Star Wars Episode IX.