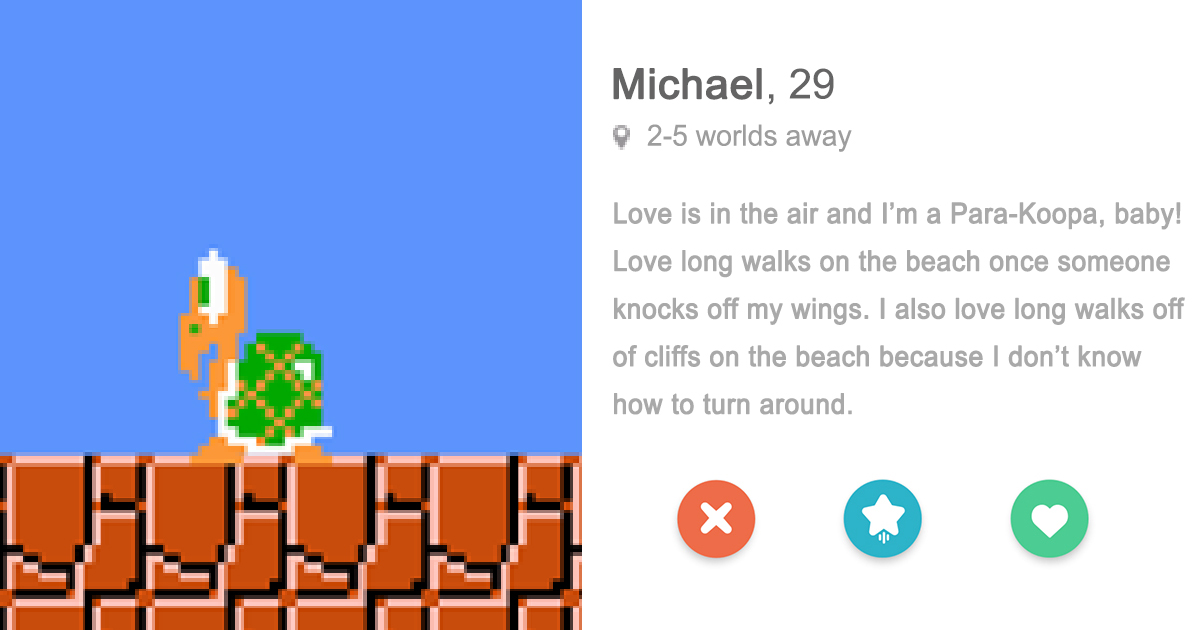 MUSHROOM KINGDOM — Continuing the trend of deceitful users of the Mushroom Kingdom’s dominant dating app, Mushd, a love-seeking Goomba named Sandra, 26, recently met up with Michael, 29, a World 1-1 Koopa Troopa who had been posing as a World 3-6 Para-Koopa, disappointed sources confirmed.

“Yeah, he’s got the shell, but where are the wings?” Sandra exclaimed in a review of her date. “I guess it’s not the worst lie I’ve seen on Mushd. One time I met up with a Wiggler who had been pretending to be one of Bowser’s kids. That was really embarrassing.”

Michael responded that the wings in his Mushd profile photo were “just a joke”, something that he tried on at a costume shop.

“I thought it was pretty obvious from the look on my face in that photo that I was being sarcastic about having wings. I mean, I wish I had them, too! I’ve tried using every kind of cream and gel but I can’t grow them by natural means. That doesn’t make me less of a Koopa, though. We all look the same once Mario jumps on us and we’re standing there in our boxers. If you ask me, she’s being shallow if she can’t see past a little white lie.”

Other users have had similarly dishonest experiences on Mushd.

“I was chatting for months with this Toad named Captain,” said Leanne, a 29-year-old Birdo. “We really bonded over the fact that we were both from World 3-6, and stuff like how pretty the local Super Leaves are. He even told me a funny story about getting in trouble for hitting the local P-Block and stealing a bunch of coins.”

When Leanne asked to hang out, she discovered that Captain actually resided in World 8-4. He was just “exploring” World 3-6, so he knew the locale well enough to lie about it.

“World 8-4 is like a 45-minute warp pipe commute,” said Leanne with disgust. “I’m not looking for something long-distance. I’m almost 30 and I’m still single, there are only so many more eggs that I’ll be able to spit out of my mouth. I have to find someone to settle down with, and all of these liars on Mushd are really cramping my style.”

When asked for comment, Captain retorted, “You can just go to World 4-2 and get an express warp pipe to World 8-1. I don’t see the big deal, bring a book or something.”