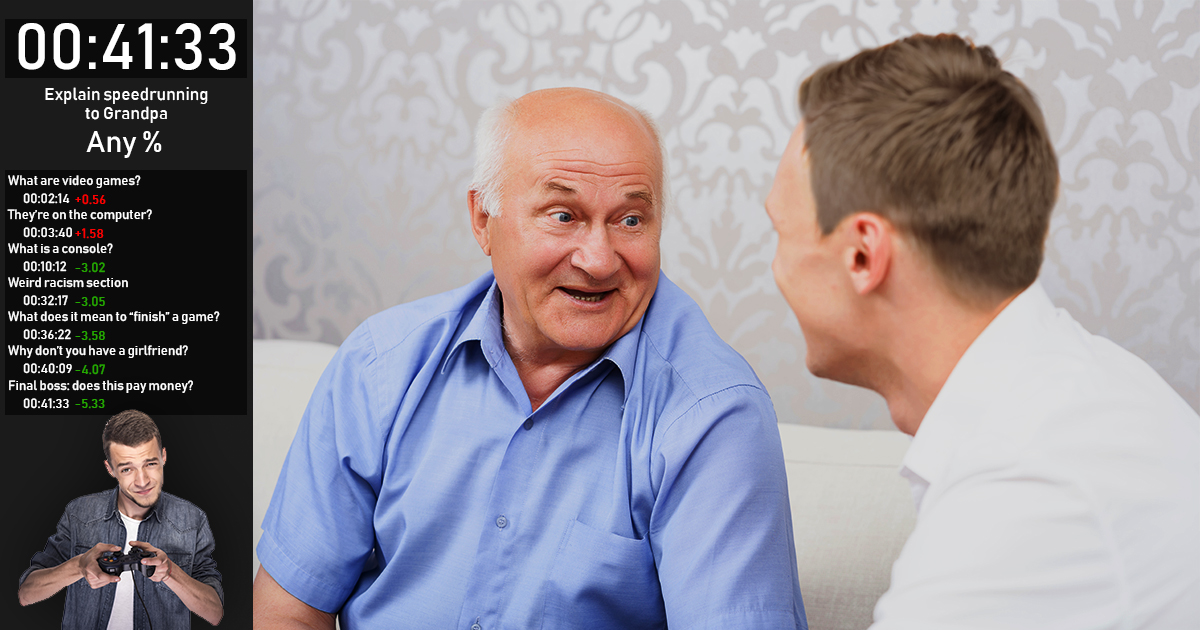 BONNER SPRINGS, Kan. – After an innocuous attempt at small talk by his grandfather Frank, speedrunning Twitch streamer Grady Millward now holds the fastest time for explaining what speedrun streaming is to a person over 70: Any %.

The run started when Grady got lucky after his grandpa’s RNG dropped an early “So, what are you doing now-a-days?” as the holiday meal was being served. This allowed Grady to skip the ‘You Know Who’s Ruining the Country’ and ‘Re-telling A Story Everyone’s Already Heard’ sections of the conversation, both of which are notoriously long and difficult to navigate.

“I spent the past year running this conversation as much as I could,” said Grady when asked about what strats he employed. “Retirement homes, VA halls, Buick dealerships. I’d go to them all and figure out the best routes to understanding. It was pretty tough, they had a lot of questions. Well, really just ‘Why?’, but they asked it a lot of times.”

Once Grandpa Millward compared it to a race against a bunch of invisible people before he’d even finished his green bean casserole, Grady knew he was on a world-record pace. Just as the rest of his family was asking about dessert and the possibility of changing the subject, Frank finished, clocking the final time at 41m 33s.

“I learned a lot,” said Frank Millward about his grandson’s hobby. “Like, what a split and FailFish are and that I should have had more kids so I’d have had a better chance of getting a grandchild who was into sports or something.”

When asked about whether he was going to try for an even faster time, Grady said he was ready to move on to something new.

“Next year, I think I’ll try something more challenging like explaining vore,” he told reporters.

Later that night, Grandpa Millward set a new record time of his own going from complimenting dessert to using a racial slur in 9.73s.