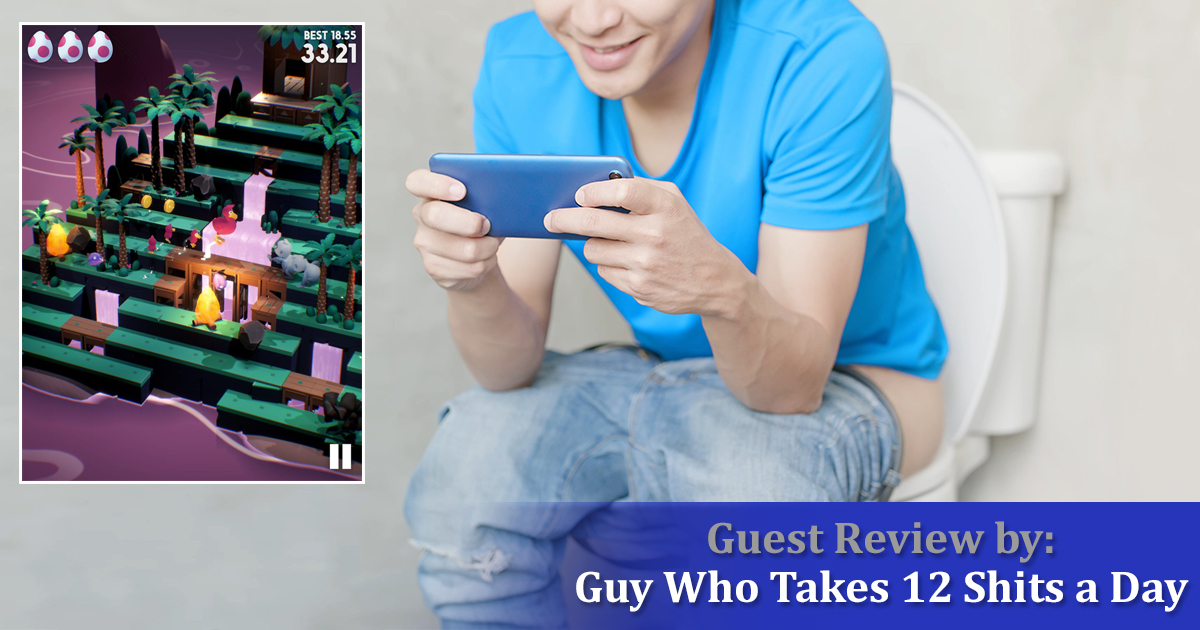 Between the Nintendo Switch and the evolution of mobile technology, it has never been a better time to be a gamer plagued by a constant stream of painful, urgent bowel movements. With their new Apple Arcade service, your iPhone has just become a very legitimate contender for a little more of that toilet time. For five dollars a month (or about the money you make shitting at work in a given day, honestly), you could have in your pocket a steady stream of some of gaming’s most exciting new releases.

Whether you’re using the john at work or just balled up on the bathroom floor at home praying for this eternal gastric torment to be over, Apple Arcade has something worth playing in just about every notable genre. Here is just a sampling of the games I’ve been enjoying with this incredible service:

Sayonara Wild Hearts – This narrative rhythm game provides a thrilling pick up and play experience with great visuals and a unique story, but most impressive is the music. Remember to bring your gaming headset to the bathroom when you play Sayonara Wild Hearts to appreciate this game’s strongest asset, its gorgeous pop soundtrack.

Super Mega Mini Party – From Overcooked! to Mario Party, everyone loves a great local co-op party game, but developers never take into account a crucial component, that the game is constantly interrupted by someone, generally you, having to take a mean shit. There’s no momentum or flow to the game. That’s where Super Mega Mini Party comes in. It’s a party game on your phone, so you can leave the room every 15 to 60 minutes and not have to pause an intense grudge match. This game just came out and I can’t get into a party yet, but for innovation alone, it deserves a spot on this list.

Mini Motorways – Dinosaur Polo Club’s follow up to the delightful mass transit planning game Mini Metro tasks you with designing roads and routing traffic in increasingly crowded cities. Not only does it work in large or small doses, but the game will actually benefit you in the real world, helping you to better understand the flow of heavy traffic and the importance of direct routes while racing home to hopefully at least make it through your front door before your innards betray you.

Dodo Peak – A modern take on some beloved classics, this Q*Bert and Frogger inspired platform puzzler is an absolute delight that will make you wonder where the minutes have gone and when that guy in the next stall got here. Dodo Peak is a hidden gen on the Apple Arcade and it passes the most important tests of a great game: it’s fun, and it made me forget how long ago I finished going to the bathroom.