Opinion: Gaming Is Labor, and It Is Being Exploited 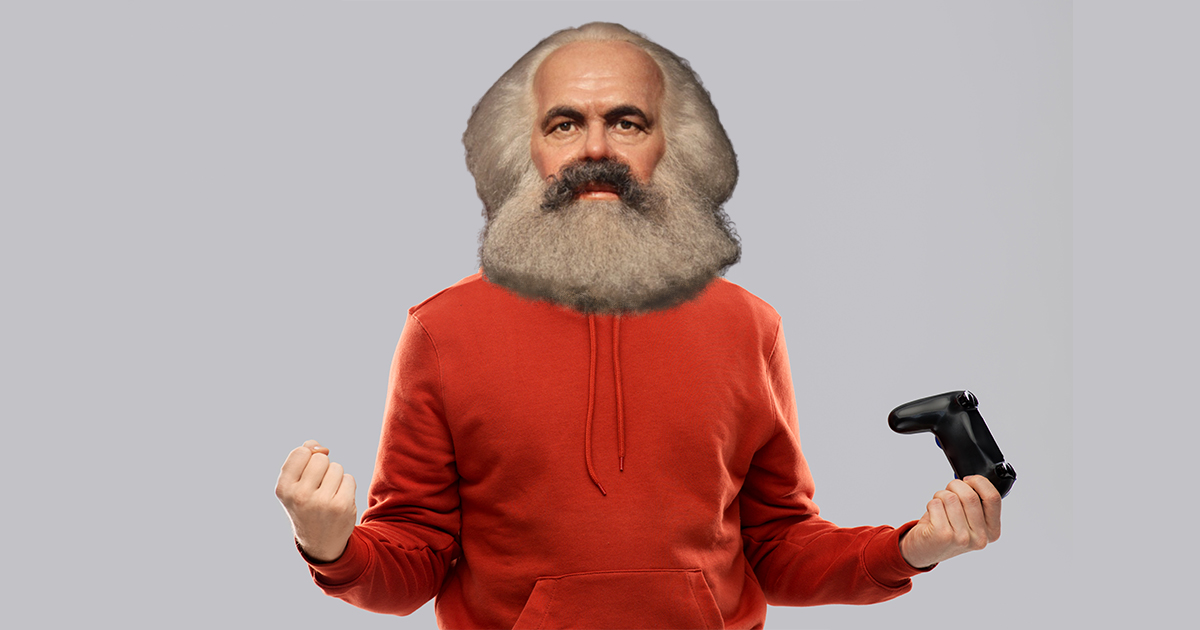 Leftist ideas are becoming more mainstream in America, but many workers are still forgotten. I am here to advocate for perhaps the most forgotten of all. I don’t care if I end up in chains for saying these words, because they are the truth: Gaming is labor, and it is being exploited.

You probably haven’t read Das Kapital, a very large and important book that I finished really fast and wasn’t even confused or anything. In this book, which I read, Karl Marx explains the nature of labor and value under capitalism. It’s way too complicated for you to understand on your own. That’s not your fault — the average Gamer is simply too ignorant and malnourished to read an entire instructional booklet before logging on.

But you can’t play a new Game if you don’t know the controls, and make no mistake: Revolution is a Game. So I’ll try to explain the basics in terms you can understand.

Let’s say you are a factory worker in China. The factory makes computers. Every day, you and your coworkers show up at the factory, where there is everything you need to create as many computers as you can. That includes tools and raw materials, components, lots of stuff — we’ll just lump these things together and call them “inputs,” because complicated lore sucks and I hate it. So, every day at work, you consume the inputs with your labor, and in the process, you transform them into products. The products (computers) are worth more than the inputs (metal, glass, silicon, factory tools, etc.), because they have absorbed the value of your labor. Again: your labor is what makes the product more valuable than the sum of its parts.

But as a factory worker, you don’t own the computers you make. In a capitalist system, the owner of the product is the person who owns the inputs. That owner, the capitalist, is free to sell the computers for market value. But the wages that the owner pays you, the factory worker, are not based on that market value. Wages are based on how little the owner can get away with paying you. In an economy where the owners have all the power, that can be very little indeed.

Did you get all that? Probably not. If you want me to repeat it, press the “up” arrow and read the last three paragraphs again. Press the “down” arrow to continue.

Now, let’s say you are a coder in Seattle. You get hired by a video game developer. The developer has purchased an office full of those computers from China. Every day, you and your coworkers show up at your desks, where you are given all the inputs you need to code a Battle Royale video game. The computers from China are now inputs. Other inputs include server space, electricity, and I don’t know, whatever stuff you use to make a video game. The game developer owns all of these things. And using all their inputs, you and your coworkers create the product: a video game. Just like the factory owner, the game developer can now sell the product (the video game) for its market value. It doesn’t matter if they do it with a subscription, or a one-time payment of $60, or maybe it’s free to the user and they make money off marketing partnerships. Whatever. That’s still market value. And just like in the factory, the wages are not set by this market value at all. The wages are set as low as coders in Seattle will accept. So, the profit cycle continues: the developer’s profit comes from the gap between those wages and the value of the labor itself. The gap for a coder in Seattle might be slightly less than the gap for the Chinese factory worker, but it’s there. If it wasn’t, the game developer would not be profitable.

Okay, now stop for a second. Breathe. Make sure you have all your potions and weapons, because you are about to meet the Boss. Quicksave. Ready?

Imagine a completely empty Battle Royale game. This video game has been developed, but nobody has played it yet. The beta hasn’t been opened. Servers are completely dead — no squads, no streamers, no griefers. Nothing. In that state, is it really a Battle Royale game at all? No, it’s not. That’s because when an online game reaches the hands of the Gamer, the game ceases to be a product anymore. It’s an input. Just like the computers from China, it goes from a product to an item used to make a product. And what’s missing is our labor.

The game software, the console, the internet connection, the screen — these are all inputs. Your labor, your gaming, is what transforms these things into a product like Fortnite, which gains its value from how many Gamers are playing it. And while you might think you own all the inputs just because they’re in your house, that can’t possibly be true. If it were, you would own the product.

Let’s say you’re a Gamer anywhere in the world. You install a new Battle Royale game developed in Seattle. You and your co-Gamers are presented with a virtual world, physics engine, cosmetic items, weapons, and everything else you need to create a thriving online game. You take in these inputs, and with your gaming, you transform them into an extremely valuable product. Fortnite is worth billions of dollars. Do you get your share of that value for your labor? No. In fact, you don’t even get wages — you pay for a season pass. They sell you a product that exists on the back of your own unpaid labor, and worst of all, they expect you to like it.

So, I’ll say it one more time: Gaming is labor, and it is being exploited.