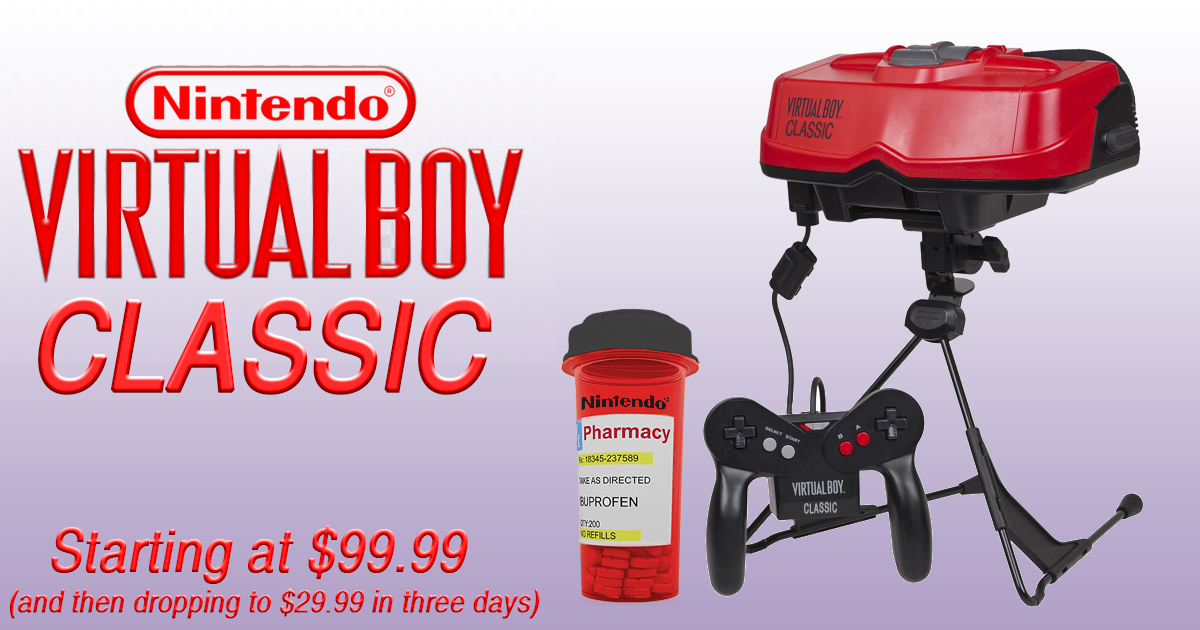 KYOTO, Japan —  Nintendo has announced they will be releasing a classic edition of their stereoscopic 3D Virtual Boy system this spring, following the success of their NES Classic and SNES Classic consoles. The Virtual Boy Classic Edition will come bundled with three games as well as a large bottle of extra-strength Ibuprofen to relieve the intense migraines given to players by the system.

“In the age of Oculus Rift and Google Daydream, consumers are ready to embrace the magical experience of retro VR gaming, even if the original was a colossal failure,” said Nintendo president Shuntaro Furukawa. “Our Virtual Boy reissue is our way of telling the world to stop complaining about our online service because we can and will hurt you in ways beyond your imagination.”

Preloaded with Mario’s Tennis, Virtual Boy Wario Land, and Nester’s Funky Bowling, the new Virtual Boy has been designed to perfectly replicate every feature from the original Virtual Boy.

“The lack of portability, zero tracking, red monochromatic graphics that feels like you’re staring into the heart of a dying sun… it’s all there,” marveled playtester Brian Forrester, one of the 770,000 people to have owned a first-generation Virtual Boy.

According to Furukawa, it took months of R&D to accurately recreate the agonizing eye-pain caused by playing the Virtual Boy for more than five minutes. While public health experts and human rights groups have unanimously condemned Nintendo’s decision to re-release the Virtual Boy, video game critics praised the company’s commitment to accuracy.

“In our nostalgia-driven culture, staying true to what we remember from our childhoods is essential,” says Kotaku critic Amanda Howard. “Playing the Virtual Boy in 2019 made me feel like I was 13 again — when pain used to throb so intensely behind my optic nerve that I prayed for death every single day.”