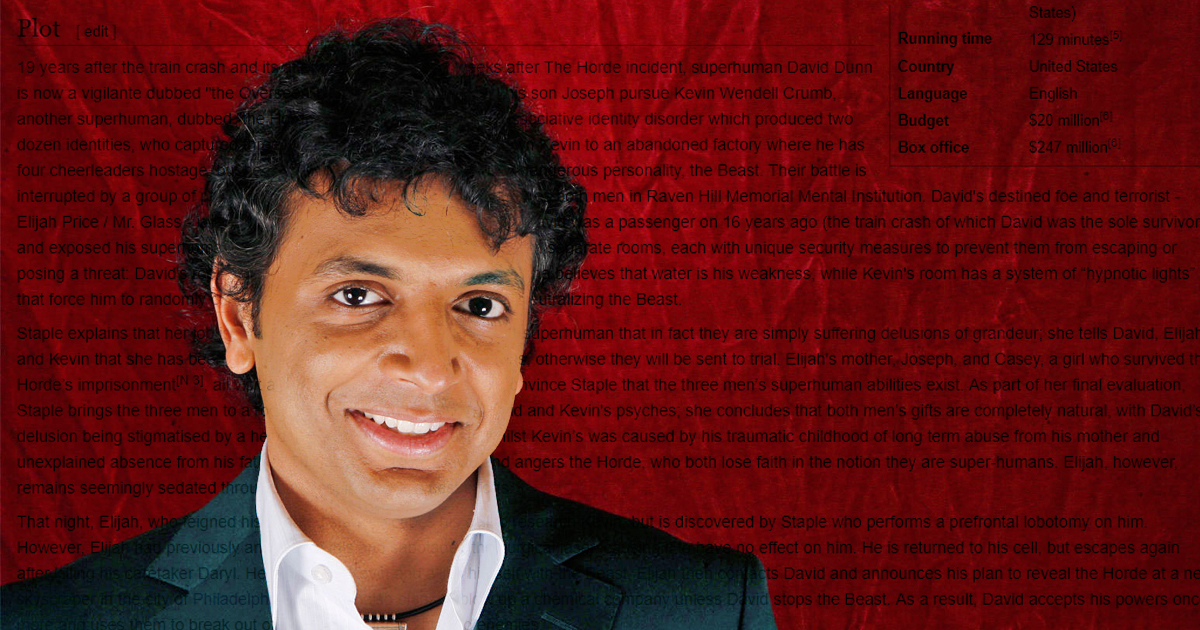 LOS ANGELES – Following the disappointing critical reception of Glass, M. Night Shyamalan and Blinding Edge Pictures have announced the revolutionary filmmaker’s next project will be released straight to Wikipedia synopsis.

“Honestly, [Shyamalan] has just been gutted by the critics these last few outings, and doesn’t really have the heart to spend years crafting an entire movie only to have it shit on by some joker with a film studies degree from Flyover State University that just so happens to be an approved critic on Rotten Tomatoes,” co-producer Ashwin Rajan stated at a press conference Friday morning. “We know exactly the venue in which people like these movies… Wikipedia. It’s a risky move, but we’re confident it’ll pay off in the long run.”

Blinding Edge has decided the most cost-effective way to approach their next project would be to not actually make the film at all, but simply have a three-to-four-paragraph summary of the main plot points available for fans to enjoy online.

“The synopses of my films have some of the highest page views on the internet. Can you imagine the sort of payout I’m going to get from Jimmy Wales when I crank out twelve to fifteen hit new Wikipedia pages a year? I can write this shit in my sleep,” said Shyamalan. “These things do pay, right?”

“Sure, everyone has seen The Sixth Sense, Signs, and maybe even Wide Awake,” explained Russo. “But have you ever read a synopsis of one on Wikipedia? Hand to God, they’re just as good, if not better. When I read ‘Malcolm finds his gunshot wound still there, revealing that he has been dead the whole time [23],’ my hands started shaking so bad I nearly dropped my phone in the toilet. It also only took up 45 seconds of my life.”

Although the Wikipedia articles will still feature a poster and full cast list, Shyamalan ruled out creating even a trailer for the non-films.

“Bruce [Willis] signed a seven synopsis deal, and in return, I promised to stop calling him at three in the morning to catch up,” he said, gazing longingly at a framed picture from the 2000 Academy Awards red carpet. “He was very specific about not having to be on camera.”

Shyamalan stated that he floated around the idea of just tweeting random plot twists for — whoa, holy fuck, did you know this? Apparently he wrote Stuart Little! That movie rocks.