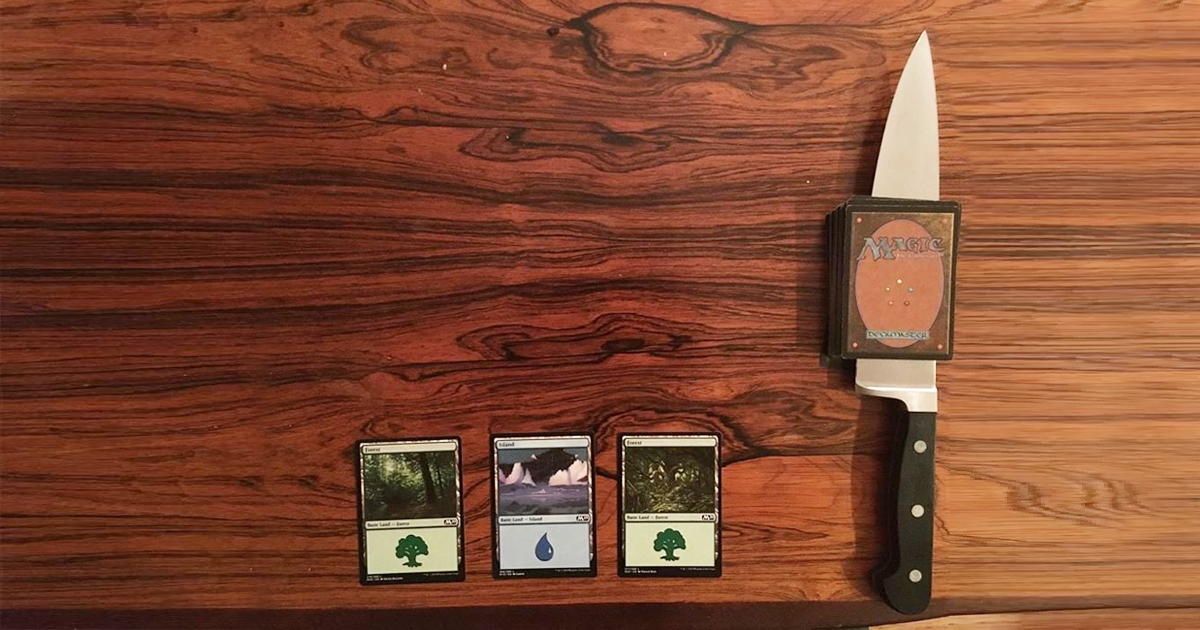 NEW YORK — Local Magic: the Gathering player George Plott told friends that he possesses a new deck with a “secret weapon” that he thinks will even the playing field in future tournaments, according to those familiar with the situation.

“All of my friends have been playing tier one meta decks, and I just don’t have the cash to keep up with them. It felt like I hadn’t won a game in months,” said Plott, unlocking a steel briefcase with his new deck inside. “I was honestly considering leaving Magic and finding a more balanced game. I’d heard good things about Hearthstone. Things were looking low.”

“That’s when I decided to add a knife to my deck.”

According to Plott, he originally got the idea from watching Magic: the Gathering content creators.

“I was watching this streamer Merchant complain about how broken standard is currently, and how there’s no really counterplay to the best decks,” Plott continued. “And I was thinking, there’s got to be something that no one has thought of. And then it hit me: I should put an actual weapon to my deck. Something that can’t be stopped by mere Magic cards.”

Sources close to Plott said that he then took to Twitch to proudly show off his deck and explain the innovative mechanics.

“The strategy is to run a lot of card draw and deck filtering,” Plott told viewers. “You want to draw the knife as quickly as possible. If you can’t get a knife, you can always fashion a shank out of various household objects. The point is to make it clear that you will shank your opponent with no remorse.”

Plott told the stream that he was incredibly excited to show off his new deck at his next “Friday Night Magic” event, believing that his new strategy was going to completely dominate the competition.

“I’ve always done a lot of deck brewing, but nothing I’ve ever made has been as cool as this. I don’t want to brag or anything, but I think there’s a real possibility that this could be a meta-changing deck.

At press time, Plott  was reportedly holding a knife to another player’s throat, threatening to “Gut you like goddamn fish if you play one more fucking counter spell.”