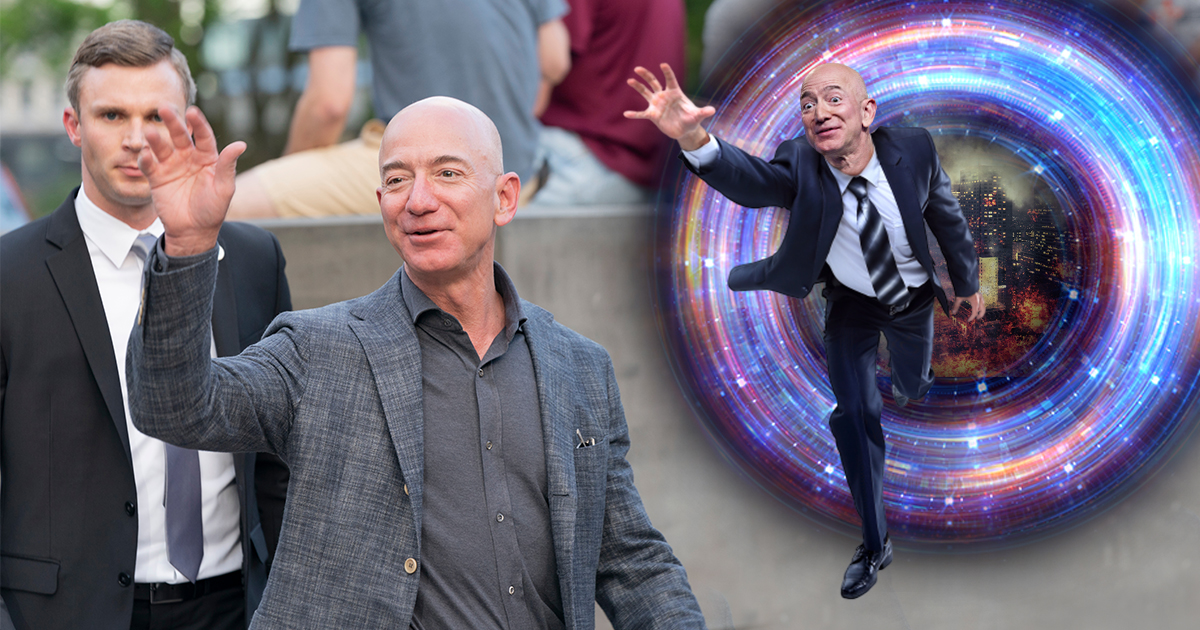 SEATTLE — Billionaire Jeff Bezos reportedly came face to face with a time-travelling Jeff Bezos from a dystopian future this morning at Amazon headquarters, who warned his past self to stay the course.

“Just keep following your megalomaniacal instincts,” said Emperor Bezos, who traveled across the sea of time to give himself a pat on the back. “And soon the fleet of drones you have assembled to deliver packages will deliver glory.”

Witnesses at the Amazon warehouse where the incident occurred describe Emperor Bezos stepping out of what appeared to be a tear in the very fabric of the universe.

“Mr. Bezos looked very excited to hear that he would one day be the supreme ruler of the entire planet,” said one warehouse employee, who spoke anonymously out of fear of being murdered or fired. “He even asked if his subjects loved him, but future Bezos told him not to get cold feet.”

Sources close to the situation confirmed that Emperor Bezos returned to the cruel time from which he hailed after the meeting, but a spokesman for Amazon denied any knowledge of the encounter, blaming the rumors on disgruntled employees who were fired for taking too many bathroom breaks.

“These allegations of time travel are nothing more than science fiction. Mr. Bezos received no such visit,” said Amazon PR representative, Melissa Wood.  “And what’s more, if Mr. Bezos were to one day seize control of the world, he would be both a kind and benevolent ruler. To prove this, he is adding a free month of Amazon Prime to everyone’s account.”

At press time, dystopian Jeff Bezos revealed that he was from the far-off future of Spring, 2020.