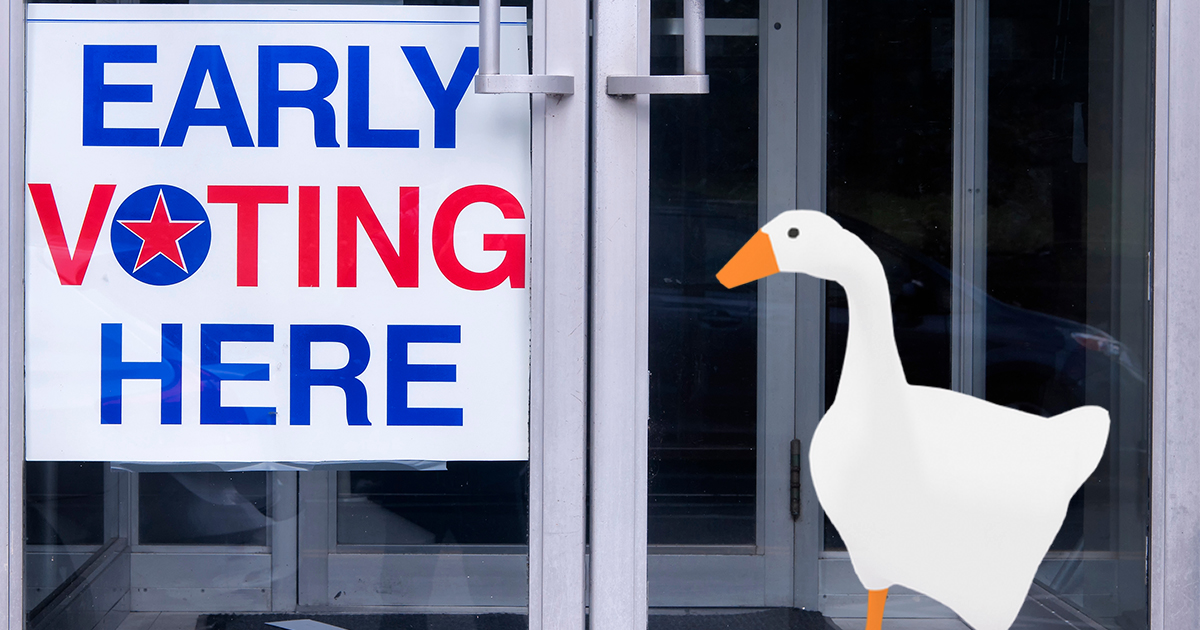 KEENE, Ky. — Several Keene residents have reported cases of voter intimidation at the small town’s early voting location, noting that the polls are being guarded by a no good, horrible goose.

“I got to the front of the line after hours of waiting and I suddenly heard a honk,” said DeAndre Holmes. “I turned around and this crazy bird just chased me all the way down the street. It’s bad enough knowing that they’re just going to throw my vote out or make up a new ID law when I get inside, but now I have to deal with this goose too? What a rotten day.”

The avian culprit was the cause of several hijinks at the voting site, such as stealing pens from every booth and scattering voter rolls across the floor. The goose was also able to cut through a loose wire with its beak, shutting down the site’s sole vote counting machine before rogue Republican poll workers could.

“I simply don’t see this goose as a menace to election security,” said Republican Senator Mitch McConnell. “If anything, it is doing a great service to our state. I’ve heard that it managed to get a hold of a local drop-off box and drag it into a nearby pond, and frankly that saved us a lot of time and kerosene.”

Despite its terror tactics, the goose’s political affiliations are unclear. Locals reported that the bird was seen chasing off members of white supremacist group the Proud Boys by flapping its great, big wings.

“I came here hoping to scare some of these dirty liberals off today,” said Proud Boys member Clayton Ashby. “But this hunk of feathers untied my shoes when I wasn’t looking and knocked me flat on my ass. My handgun went off and shot me in my foot. And then the damn thing has the nerve to grab my Oakleys off my face while I’m bleeding out? Somebody ought to do something about this domestic terrorist.”

Local authorities say they are committed to protecting the community from the menace. Keene police plan on arresting the goose in hopes that it’ll be charged with a felony, keeping it away from polling sites permanently.