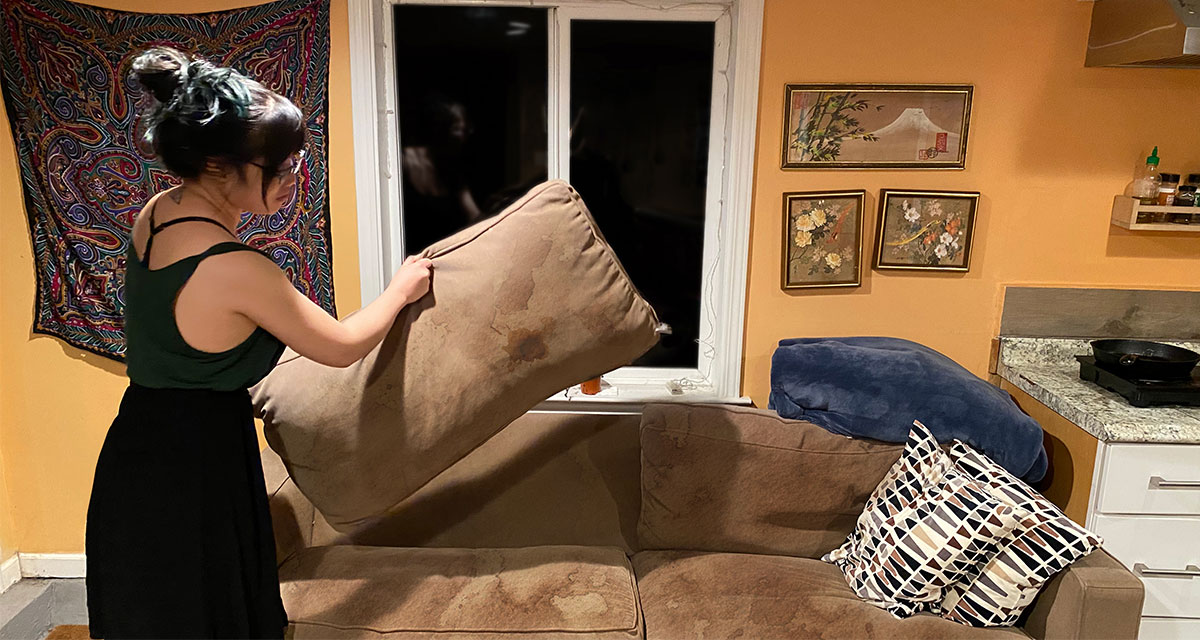 SALT LAKE CITY — Relatively tidy local woman Aaliyah Thomson is allegedly debating which side of her horrendously stained and putrid couch cushion will be the least offensive to the eyes and noses of guests, sources familiar with the decrepit piece of furniture confirmed.

“I’ve been debating for hours what stain would be worse to explain to my friends — one side is rancid tikka masala, the other is bodily fluids. You’d think bodily fluids are worse, but it’s not poop or semen… it’s just a bit of throw up, which really isn’t that bad when you think about it. So this choice isn’t as easy as it seems,” said Thomson. “Unfortunately, because I’m the only responsible one in this shithole, I’m frequently the one washing all the dried blood from our sink, or explaining that hiding dirty dishes under your bed doesn’t make them go away.”

Roommate Mariam Hubbard asserted, however, that the other tenants are becoming fed up with Thomson’s fastidiousness.

“Aaliyah makes for a real odd couple. It’s just like that old TV show, ‘Frasier’ — she’s this total neat freak who insists letting stray animals eat food off our floor is a bad idea, and that we need to put a towel down when sitting naked on the dining room table,” said Hubbard. “I mean, I moved out of my parents’ place because I was sick of being told that eating leaves from the backyard is causing my hookworm infection. I don’t need to hear it here, too.”

For his part, landlord Teddy Clayton was appalled by the levels of filth inside his rental property.

“I checked in with my new tenants for the first time in a few weeks… and all I can say is, if Thomson is the neat one because she considered flipping a stained cushion, I can’t even imagine the horrors occurring inside the other roommates’ bedrooms,” said Clayton. “I’m considering bug bombing the whole place with them inside. Sure, it might kill them, but if it doesn’t, it’ll be the cleanest any of them had been in years.