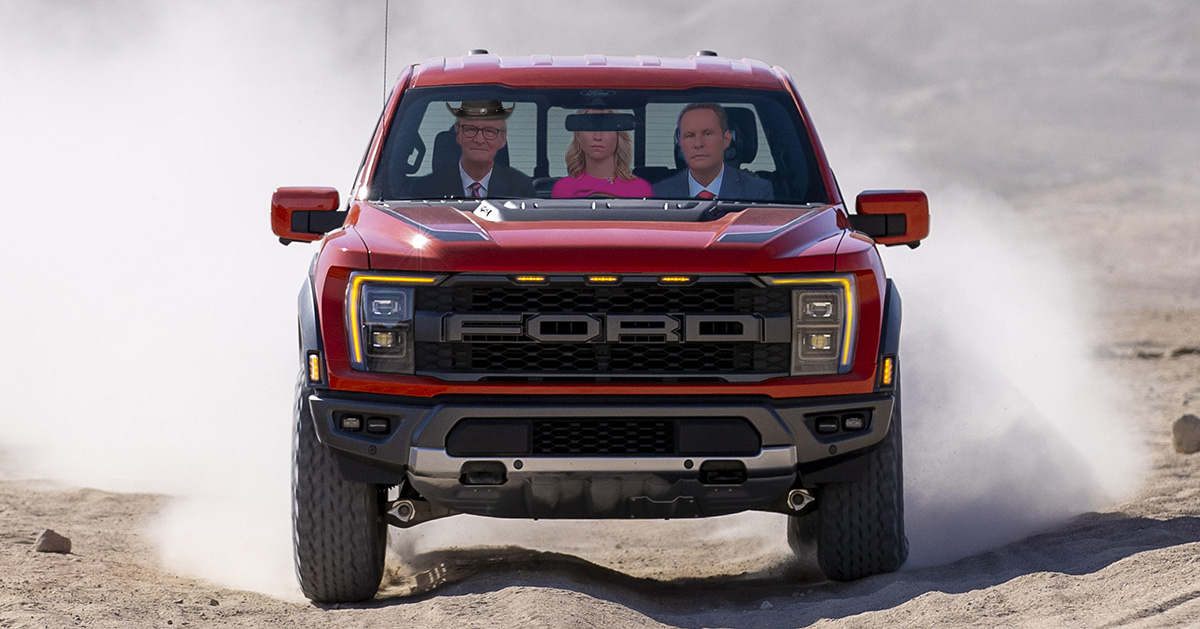 NEW YORK — Producers of “Fox & Friends” announced today that they will move the popular news show from its regular shooting location in Rockefeller Center to the front seat of a Ford F-150 pickup truck.

“We really want to connect more with our core audience,” explained executive producer Lauren Peterson. “Real Americans aren’t stuffy liberal elites who sit behind a desk with a $2,000 suit and tie — real Americans drive giant extended cab trucks, wear hats that were intended for horseback riding, and pound their lips full of Skoal. Of course, there will be some technical difficulties involved with fitting the entire cast and crew of a television show in the front seat of a truck, but much like the great Henry Ford himself, we believe that ingenuity can overcome any obstacle, that hard work always pays off, and that the Jews control too much of the media.”

“There’s just something trustworthy about a person who sits in the front seat of a big pickup, you know?” said Bates while sitting in the front seat of his big pickup. “You know that guy’s a real American who’s gonna shoot it to you straight, and not try to brainwash you with some socialist agenda that makes you and your entire family go join ISIS. Plus, there’s like, a 90% chance Seger’s gonna be blastin’ on the radio, and that’s what real America’s all about.”

Ainsley Earhardt, who has co-hosted “Fox and Friends” since 2015, also feels the move is right for the show.

Executives at Ford said they plan to begin construction on the custom-made “Fox & Friends” truck as soon as all the parts arrive from Mexico.