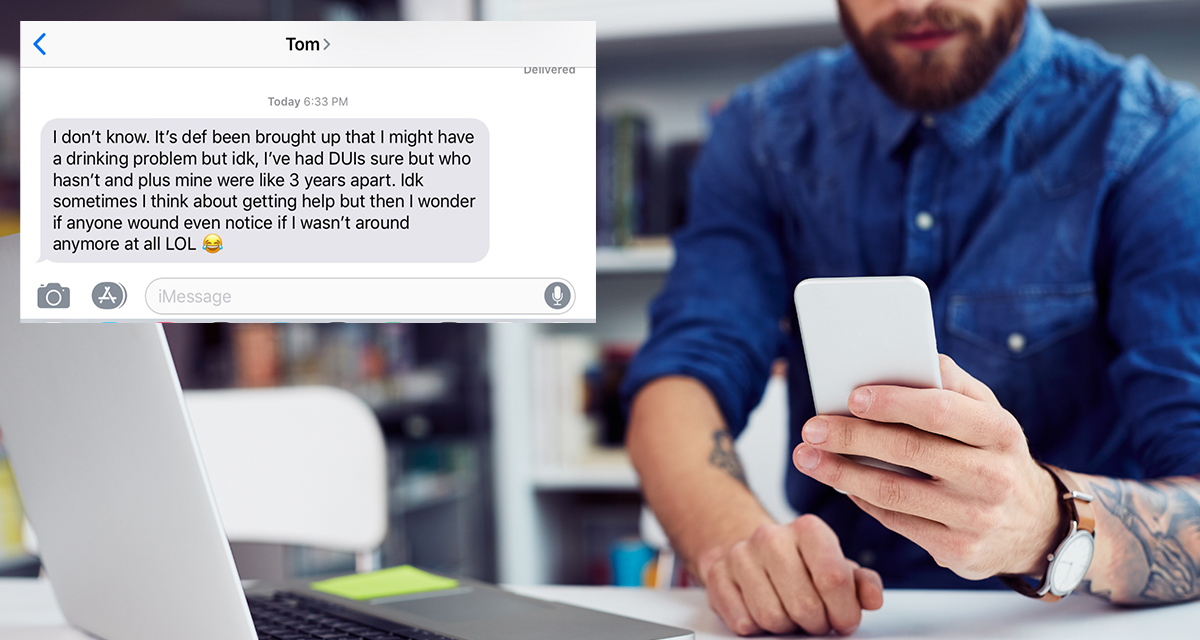 HARRISBURG, Pa. — The last-minute addition of a “lol” in a text last night from 32-year-old Tom Jannuzi salvaged an otherwise genuine attempt at vulnerability and emotion, sources now adding emojis after every message “just to play it safe” confirm.

“I woke up to like, four messages from Tom in this group chat — they seemed pretty serious, but he capped it with an all-caps LOL, so I’m super relieved he doesn’t actually have a ‘drinking problem’ and doesn’t really ‘wonder if anyone would even notice if he wasn’t around anymore,’” said friend Missy Hill. “I’d have been too worried to enjoy trivia, let alone wings tonight, karaoke tomorrow, and that pub crawl we’re doing this weekend if that quick ‘lol’ afterwards hadn’t made it clear he was yanking our chains and that we shouldn’t read any further into that whole ‘I desperately need help’ thing.”

Hill was not alone, as other members of Jannuzi’s social circle also didn’t realize his texts often carried ominous undertones.

“I knew he was just messing around. He’s totally unflappable,” said Shawn Porter. “Like, most people would speak up if you missed an art show dedicated to their deceased grandma for happy hour. Tom, though, just said, ‘it’s cool’ and pounded shots with us afterwards until he got tased for trying to fight that cop. Then from the hospital, he texts, ‘Well at least I get to see what a real courtroom looks like’ with the crying-laughing face. What a prankster.”

This was not Jannuzi’s first time using minor, in-the-moment alterations to save similarly perilous messages.

“I remember when I almost demanded a client pay me on time for a commissioned logo,” the freelance graphic designer said. “Luckily, my hands reacted like lightning and put in, ‘If that’d be OK,’ a ‘ha,’ and four exclamation points before firing it off. Can you imagine if I came off as actually upset he still hadn’t paid me two months past some silly contractually stipulated deadline? I’d have felt like a real dick, and they might have thought I was an asshole, so I figure just burying everything until it bubbles over in self-destructive ways is always my best bet. Better safe than sorry.”

As of press time, however, sources in the group chat reportedly wondered “what Jannuzi’s deal was” after he ignored one member’s birthday party invite, only to ask her for a ride to rehab.