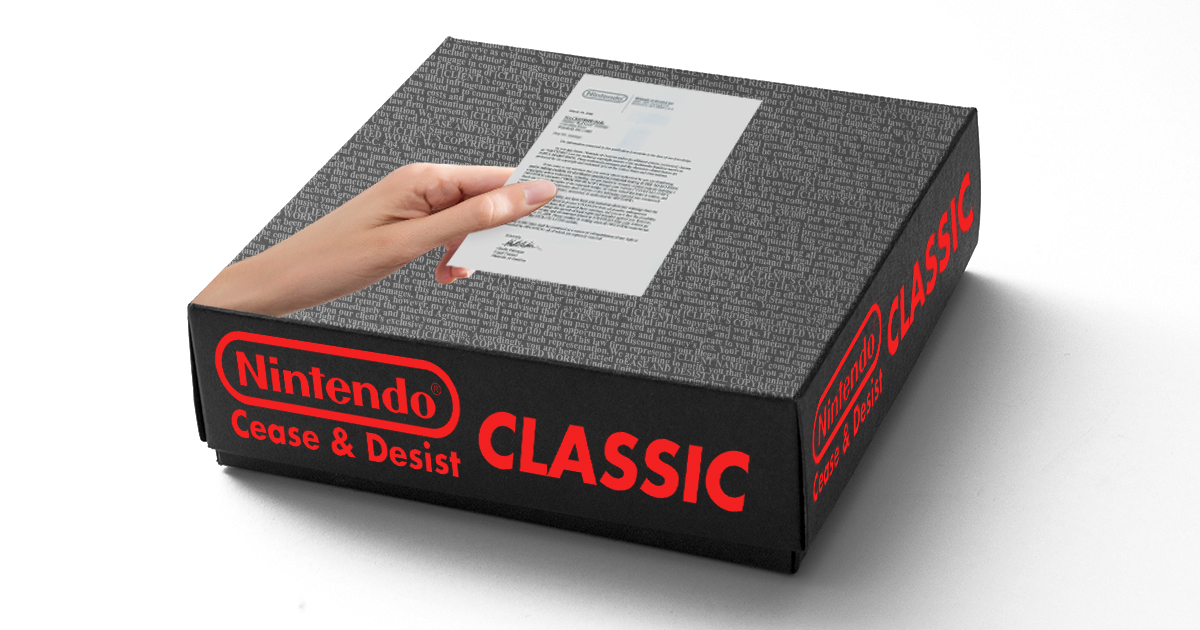 REDMOND, Wash. — Nintendo announced today the release of the newest entry in their “Classic” line of retro hardware, the Cease & Desist Classic.

“Nintendo has a storied history of great games and even greater lawsuits,” explained Nintendo of America COO Reggie Fils-Aimé. “The NES Classic, SNES Classic, and now the forthcoming Cease & Desist Classic provide fans a wonderful opportunity to re-experience their favorite moments from that storied history.”

The Cease & Desist Classic ships with over 30 classic Nintendo legal actions, each contained in their own authentic, unmarked brown legal envelope. Contents include well-known actions, such as the 1992 suit attempting to stop the production of Game Genies, to more cult-classic favorites such as the anonymous 2008 email that halted release of Mother 3’s English language fan translation.

As a bonus offering, the Cease & Desist Classic also contains the never-filed injunction against the abandoned Super Smash Bros. Brawl Fan Mod Project M. “It was a pretty intensely worded, brief but very intimidating,” said Fils-Aimé. “I know the team behind it was extremely proud, and we’re very excited for fans of our legal output to finally experience their legal vision.”

Nintendo also addressed availability problems plaguing the preceding Classic offerings. “We know supply has been an issue with the SNES and NES Classic,” said Fils-Aimé,
“But today I make this promise to our fans: there will be no shortages when it comes to the Cease & Desist Classic.”

Some fans, however, believe the collector’s item to be pointless.

“Why the hell would anyone buy this load of junk for $80 when you can just load up thousands of Nintendo cease & desists onto a Raspberry Pi?” asked Reddit user u/newnidan. “I’ve told every single person I have ever met to just use a Raspberry Pi and so far none of them have listened to me.”

Despite detractors, early sales projections for the Cease & Desist Classic predict another hit for Nintendo, with preorders having the system already outselling the Wii U.