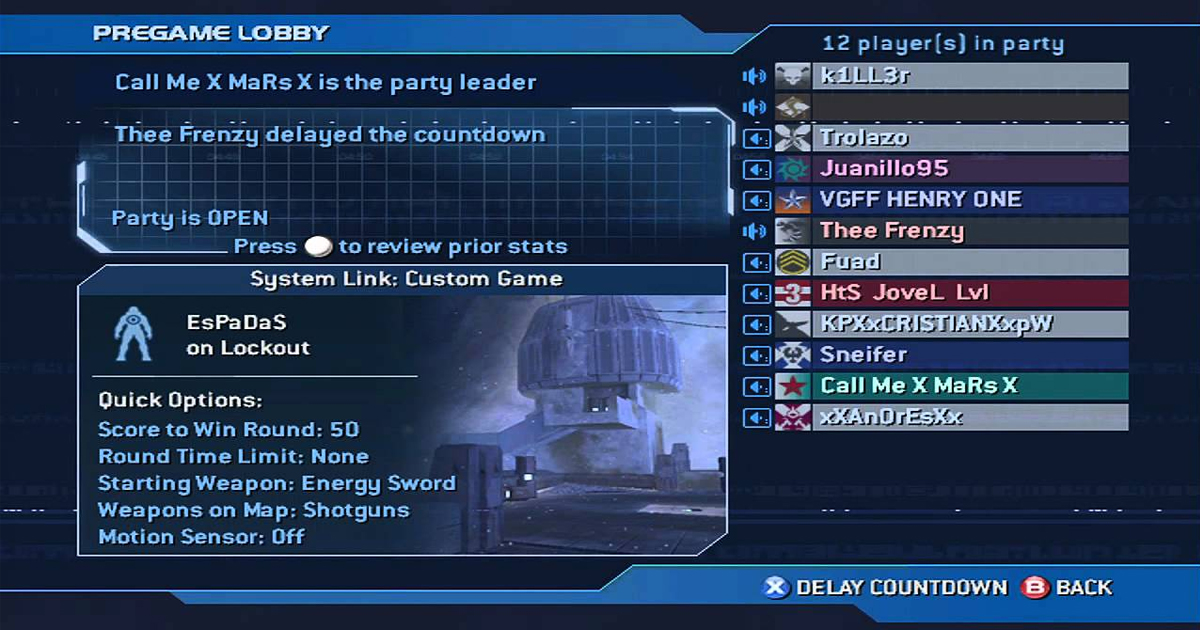 ANAHEIM, Calif. — A group of twelve Halo 2 players currently stuck in a matchmaking lobby reportedly hit the twelfth year of trying to start a game despite a player continuously pressing X to delay, according to close sources.

The match, a custom game on XBConnect with shotguns and energy swords on Lockout, filled with players on February 20th, 2006 at approximately 10:28 p.m.

“We’ve been sitting here in this fucking lobby waiting for twelve goddamn years to start the game and this asshole xXAn0rEsXx thinks it’s hilarious to press the X-to-delay button 50 million times. I mean that literally. 50 million times,” said Chelsea Harmon, also known as k1ll3r, to reporters over a headset that she got for her Xbox in 2003. “I missed the entire run of Obama’s presidency. My father passed away. My brother had a child. I just want to play a quick deathmatch on Lockout.”

Other players echoed Harmon’s disappointment in the lengthy amount of time they had spent in the staring at the blue void of the matchmaking lobby.

“What am I most excited for? Halo 3. I know it came out a decade ago and I know there’s a ton of other Halo games by now, but I’m really excited for all the new stuff,” said Thee Frenzy, who wished to remain anonymous. “That ‘Blackout’ map sounds really cool, for example.”

“I will say, in the past twelve years, I did bond pretty strongly with those ten other players. Sure, we only speak to each other based on our character names and sure most of our conversations were yelling at that xXAn0rEsXx guy, who never once spoke but continuously blasted EDM for twelve years straight, but I really value those friendships,” Thee Frenzy added before shouting “Can we just start the goddamn match already?!” to someone outside the interview.

At press time, close sources report that the game managed to count all the way down to zero and began to fade out, indicating the start of the match, before flashing back to the lobby screen with the text “xXAn0rEsXx delayed the countdown.”

UPDATE: We apologize; this article was scheduled to publish February 20th but was held up by an anonymous WordPress hacker continuously pressing a button to delay the post.