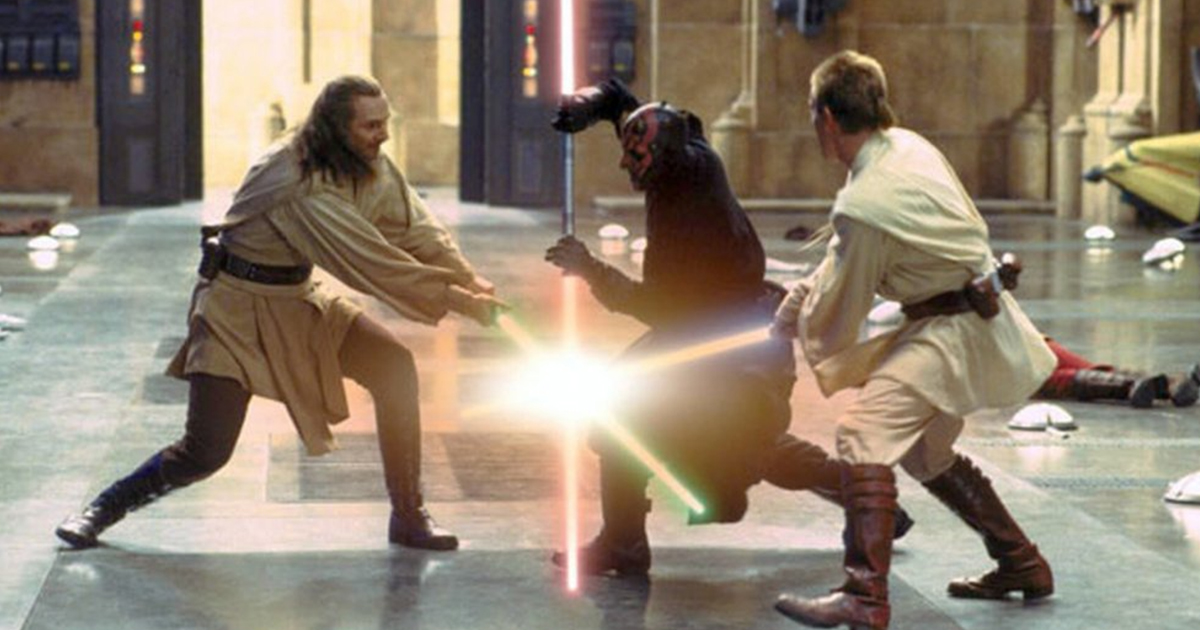 Now that Disney has released the Rise of Skywalker film and novelization, it feels like everybody has already made a “definitive” ranking of every Star Wars movie to date.

But as a 28-year-old man, I’m probably the biggest Star Wars fan of all time. It’s about time somebody wrote a list that corresponds exactly with my age and subjective emotional experience at each viewing. Who better than me, right?

1) Episode I: The Phantom Menace

The Phantom Menace is both the film that started it all, and the one all other Star Wars movies have failed to surpass. Seven-year-old me and my best friend at the time, Geoff, loved—and I still love—the rushing excitement of podracing, the witty repartee of Jedi, and the subtle racism of multiple poorly conceived ethnic stereotypes.

The next day in gym class, Geoff and I both agreed no cinematic experience would ever top watching Jar-Jar Binks blowing up tanks with blue balls. To this day, somebody half-heartedly proclaiming “yippee” brings me rushing back to the last time I was truly happy.

2) Episode II: Attack of the Clones

Attack of the Clones is more than a worthy successor to Lucas’ magnum opus. Geoff and I were a little disappointed Jar-Jar wasn’t given a more prominent role, but that was quickly forgotten under the unrelenting awesomeness of C-3P0’s head getting stuck on a combat droid body (and vice versa!), the very steamy romance between Padme and Anakin, and, of course, that alien who wasn’t a he but a she and that she was a changeling.

It was almost too much cool shit for a couple of fifth graders to process, but that extra-ness is what makes Attack the second best film in the franchise. It took everything the first one did well, and expanded on it in powerful ways — even if it wasn’t quite as revolutionary as its predecessor. Geoff and I agreed on that during a long conversation that ran long into the night, until our minds and voices became one. And you should agree with us, too. Or else you’re wrong.

4) Episode V: The Empire Strikes Back
5)Episode VI: The Return of the Jedi

Geoff and I didn’t want to watch any more Star Wars until we saw the old ones, so one night when I was 11, we watched all three back-to-back. There was no way they were going to top the original two, but they had their moments. We rewatched the bikini scene so many times the disc got stuck in the DVD player. It was one of those moments you never forget—hormones raging, discovering the beginnings of your sexual existence, together with your best friend in the world. When I woke up the next morning, Geoff had fixed the DVD player and was rewatching the Luke and Leia kiss scene. He was so smart.

I definitely also remember being pretty disappointed the guy they got to play old Anakin didn’t look anything like Hayden Christensen. Big whiff there.

6) Episode III: Revenge of the Sith

Dad dropped me off alone to see Revenge of the Sith for my 13th birthday. Geoff couldn’t make it because he was sick. I still had an okay time, but it just wasn’t the same. I’d sort of forgotten most of the story from the first two films, and I was worried about Geoff, who was apparently running a fever and having some numbness in his limbs. Overall, a solid conclusion to the original trilogy, but missing something special. We should all be able to agree on that.

7) Rogue One: A Star Wars Story

I was a little wary of watching any new Star Wars after Geoff died of leprosy in 2014. I thought the movies might bring back too many painful memories. I didn’t want to see another Star Wars alone, but I’d had a rough go of making friends during that period of my life.

I wouldn’t say I had “fun” per se, since the whole movie was kind of blurry from my watering eyes, but hey, it was pretty cool that Darth Vader was in it. They didn’t show his face, but I could tell it was Hayden under there. In the end, it definitely recaptured my childhood in some sense, although a lot of it was the bad parts. It made me finally reckon with the fact that the Star Wars I once knew—the one who had countless sleepovers with me, and who wasn’t diagnosed with that deadly skin disease until it was too late and he was dead—was gone forever.

I gave Star Wars another shot since I met this cool-seeming new guy at work named Carl, who said he liked Star Wars. I did not enjoy the experience. Carl bought a super-sized tub of popcorn and munched it throughout the movie, and all I could think was how Geoff used to love popcorn but, by the end, his fingers had fallen off and there was no way for him to pick up the kernels with his nubs. I cried through the entire movie. That probably means Ron Howard failed to strike the right tone after picking up the floundering project from Phil Lord and Christopher Miller. Carl never talked to me again afterwards which is also a huge negative against Solo.

I got a new roommate a few months ago who decided to pony up for Disney+. Larry hadn’t seen the sequel-sequel trilogy, so he suggested we watch Episodes VII and VIII before seeing IX in theaters as a way to bond. He thought it might help defuse some of the tension after he accidentally knocked over my framed photo of Geoff, but the movies were all terrible.

I was somewhat hopeful, because these films were billed as being able to fix my childhood and repaint my life in a positive light, giving me closure about the loss of someone more close to me than my own family, but they did not do that. The sequel-sequel trilogy is full of minorities and Mary Sues, and I had to share the couch with this fucking Larry guy who totally sucks. I objectively did not have as much fun—or feel as connected to a close, personal friend—as I did when I was younger. It’s like they didn’t even try and recapture the magic I experienced between the ages of seven and 11. No podracing, no Jar-Jar, no floating grapefruits, and no Geoff equals zero yippees from me, thank you very much. Try harder, Disney.