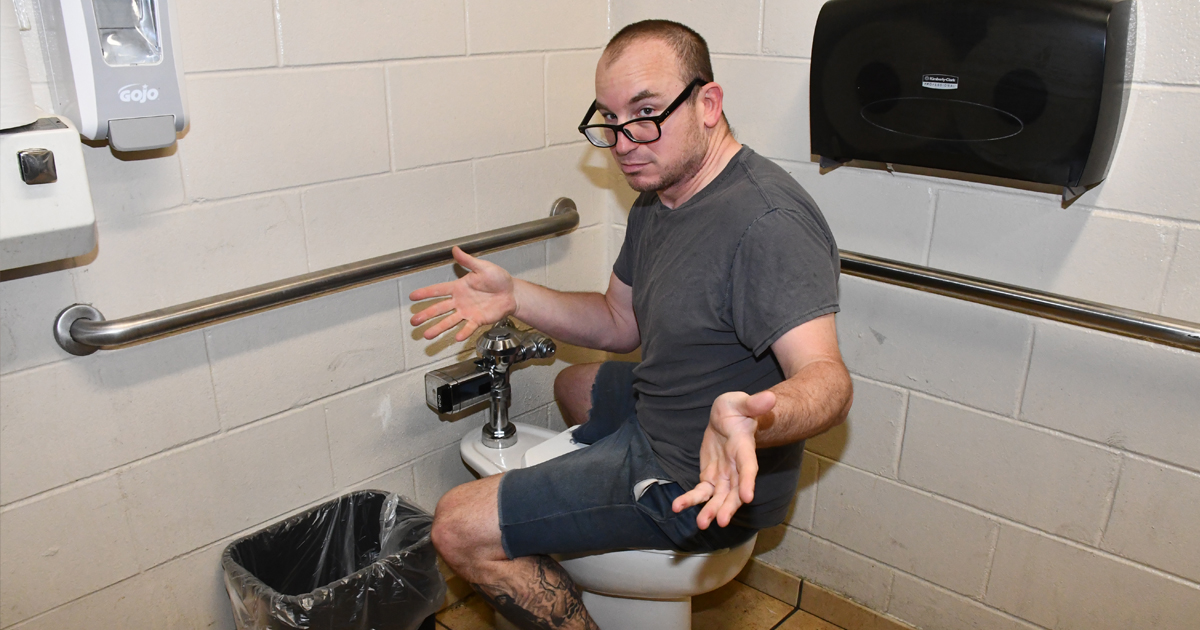 PORTLAND, Maine. — Local high school teacher, and all-around cool guy, Peter Thielbault reportedly sits on the toilet backwards whenever he evacuates his bowels, confirmed sources who wish they could pull that move off.

“I want my students to know that in school and in life, there’s more than one way to do things,” said Thielbault as he stood with one foot perched on a student’s desk with an undeniably cool posture. “We’re taught as kids to sit on a potty with our legs dangling in front of us, just passively letting poop fall out of us. But what if we were more proactive about it? What if we squatted and straddled the potty and really gave our poops our all? This is the kind of passion and outside-the-box thinking I want to inspire in my students.”

Thielbault’s unconventional defecation methods are not just reaching his students with, he’s getting through to their parents too.

“I had my doubts about Mr. Thielbault at first. His unconventional behavior like wearing sunglasses on the back of his head always confused me, but my son loves him,” said single father Bob Dwan as he sat backwards on a riding mower. “My oldest son Tyler and I haven’t been getting along lately – he thinks I’m this old, boring guy. But since speaking with Mr. Thielbault I’ve been doing everything a little differently. Just this morning, I used a urinal backwards by straddling the little lip that juts out and tucking my penis backwards. I told Tyler about it and he said it’s ‘based’ and I’m nearly positive that’s a good thing.”

Not everyone is completely on board with Thielbault, however.

“Peter is a good guy, but he’s making my job harder,” said Carter Robbel, the school’s most senior janitor. “Word got around about how he shits on the toilet backwards and now everyone is doing it. The problem is when people shit backwards, they miss the water, and all the crap piles up in the dry part of the bowl. Now I have to scrape partially dry turds towards the back of the bowl. At first, I thought the best way to do it would be standing and facing the toilet like how you’d use a plunger. But taking a page from Peter’s book, I’ve tried sitting on the toilet and I’m finding that it gives me better scraping leverage and power.”

At press time, Thielbault was taking a few days off from school due to a stomach virus, sources say he was last seen sitting on a toilet vomiting between his legs.