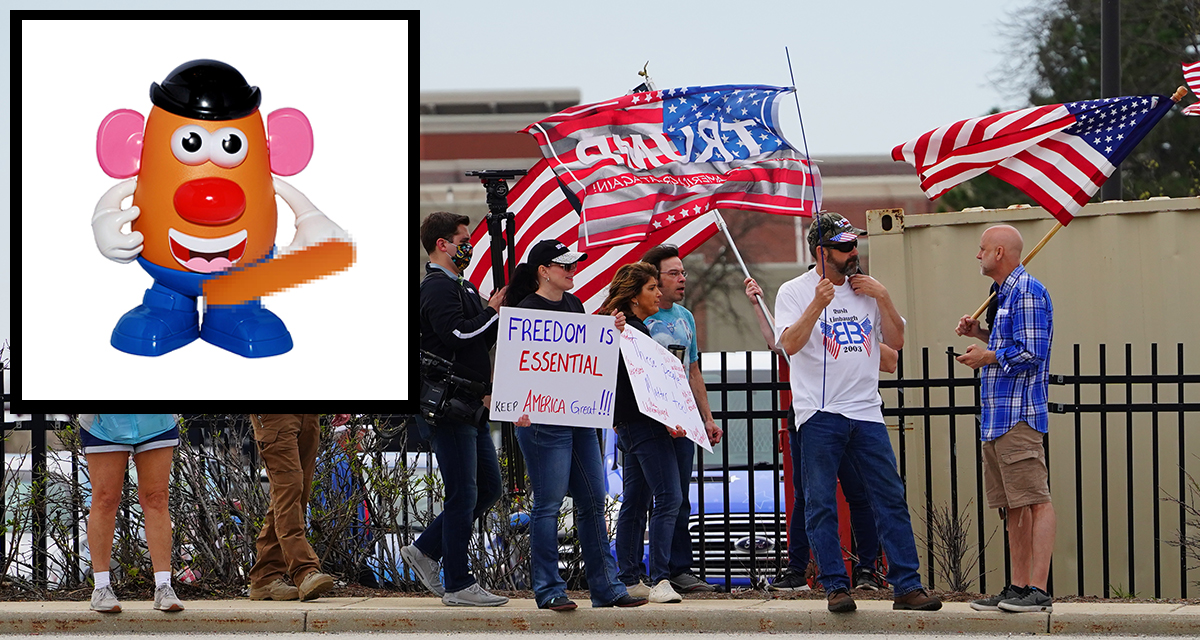 “When I heard they were dropping the ‘Mr.’ from that potato’s name it was damn near the worst day of my life. And that includes four years ago when two of my sons died in separate boating accidents on the same day,” said children’s toy enthusiast and editor of ‘The Daily 1776 Patriot Newsletter,’ Mark Clembold. “The name ‘Mr. Potato Head’ makes me think of three things. One: he’s a god-fearing potato that loves his family. Two: he’s probably Irish. And three: he was blessed with a giant horse cock that definitely turns Mrs. Potato Head’s guts into mashed potatoes every time they get nasty. Is nothing sacred anymore? I’ll be damned if they take that from my surviving children.”

Additional voices from around the country expressed similar concerns.

“First they try to take away these toy potatoes’ God-given pronouns, and what’s next? The powers that be are gonna tell me I can’t sit Mr. Potato Head in the corner of my bedroom while he strokes his big potato dick watching me do all of the things he would never dream of doing to the potato he married?” said Mr. Potato Head collector and amateur furniture refurbisher, Daryl Fischer. “Next thing you know they’re gonna try saying all that clear stuff that comes out of Mrs. Potato Head is just vodka. Gimme a break!”

Representatives at Hasbro admit they were surprised by the sudden and intense backlash.

“We were immediately flooded with letters from angry parents saying things like ‘if you remove his cock then I’m going to remove yours’ and ‘you can take Mr. Potato Head’s penis from my cold dead hands,’” said Hasbro CEO Brian Goldner. “However, I think some of these people are mistaken. We never sold a ‘giant penis attachment’ for any of our toys. These penises must have been homemade and the anger surrounding the alleged penis removal is very misguided. I have been made aware of multiple websites that have detailed instructions on crafting the ‘perfect’ Mr. Potato Head member that we will be linking to on our website’s FAQ page as a peace offering.”

Following the announcement, a majority of Republican senators began drafting legislation to prevent Mrs. Potato Head from access to legal and safe abortions.