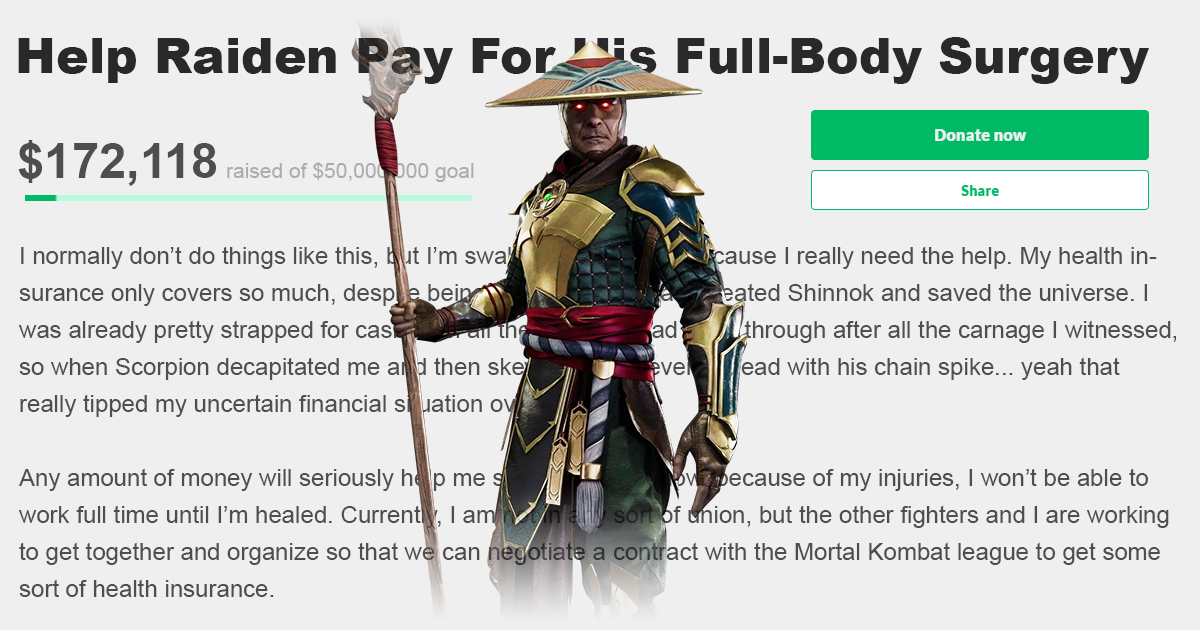 EARTHREALM — In a heartbreaking turn of events, famed protector of the realm and God of Lighting, Raiden, put out a plea on social media for help with his medical expenses following an exhibition match with Scorpion.

“I normally don’t do things like this, but I’m swallowing my pride because I really need the help,” Raiden stated in the opening lines of the crowdfunding campaign. “My health insurance only covers so much, despite being an Elder God that defeated Shinnok and saved the universe. I was already pretty strapped for cash from all the therapy I had to go  through after all the carnage I witnessed, so when Scorpion decapitated me and then skewered my severed head with his chain spike… yeah that really tipped my uncertain financial situation over the edge.”

Many of Raiden’s friends and family have come out to support the God of Lightning.

“I really feel for him. I mean we’ve all been there before,” Johnny Cage, a fellow Mortal Kombat fighter said in a series of tweets. “Being rich and famous has its perks, like being able to afford getting my spine re-inserted into my body around 26 times. Some people sadly aren’t as fortunate as I am.”

Cage, who is close to Raiden, said that they’ve spoken privately about his medical situation. “He talked to me about going somewhere in the EU for the universal healthcare, but said Sweden doesn’t deserve the potential hellfire of one of his enemies attacking him at his weakest.”

Raiden concluded the GoFundMe post by saying, “Your generosity would mean a lot to me. Having the entire lower half of my incinerated torso rebuilt from scratch will be very expensive, so anything helps!”. The campaign has already raised over 1 million dollars, accounting for 2% of the $50,000,000 goal.