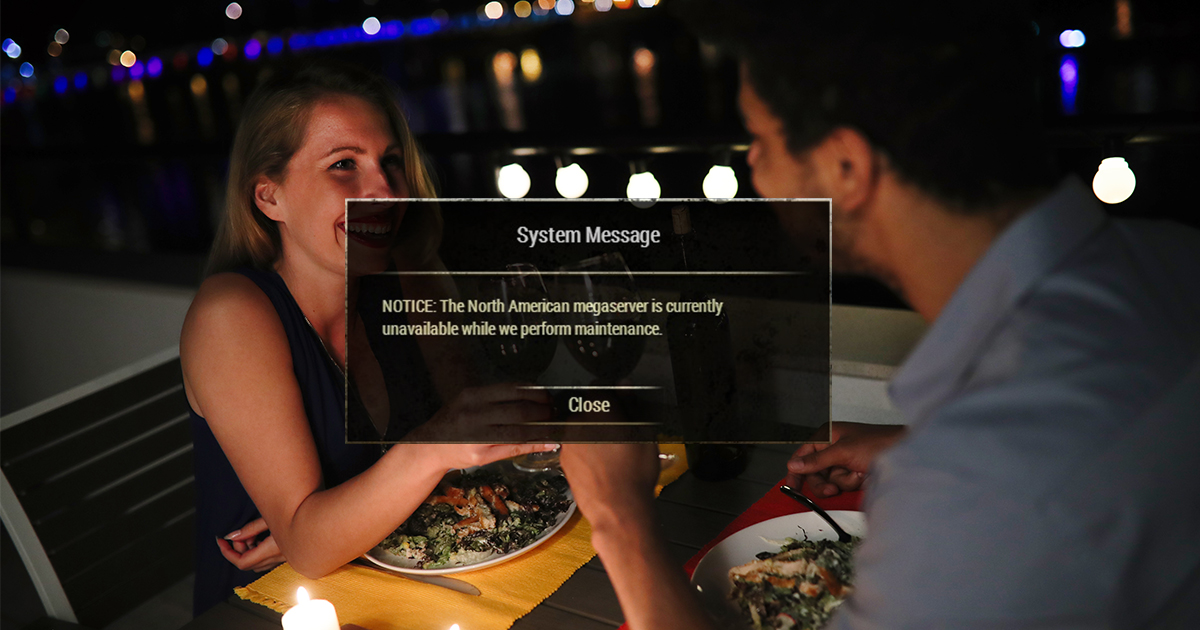 Spring is here, the birds are singing, and the flowers outside that are visible from my battle station while sitting in my Secretlab Omega racing seat are fully in bloom. This can only mean one thing: It’s the start of another great season for romantic outings on weeknights between 1 a.m. and 5 a.m. (PST)! If you’re looking for a date night idea, here are some of my top go-to’s which also happen to coincide with server maintenance hours for The Elder Scrolls Online, which is just a coincidence!

You could go to a diner during the day, but anyone can do that! When you swing by the Denny’s under the highway at 1 a.m. (Pacific), you’ll beat the crowds and have the full attention of your server AND the random guy screaming at the claw machine. Plus, the late night dining options will give your romantic excursion a frisson of danger, just like running Scalecaller Peak on Veteran Mode, which you will not be doing due to mandatory server downtime. Coincidentally.

If you’re anything like me, you love the wonders of nature. My favorite is the Aurora Borealis over Eastmarch at night, which apparently is based on a real thing. Earth’s night sky can also add a touch of elegance to any date, even though it only has one moon. But, beware! If you go too early, you’ll miss the totally real and breathtaking celestial phenomenon that astronomers call “super-nightiness.” So don’t even bother going before 1 a.m. (Pacific Standard Time), no matter how many times your boyfriend begs you to stop grinding vMA.

3 – SNEAKING INTO A GRAVEYARD

Sneaking into a graveyard is a great way to walk that hot slippery line between romance and danger, and is definitely not something I’m only suggesting because you can do it at 3 a.m. (Pacific / 12:00 a.m. Eastern) after the ESO servers go down again. Just make sure to sneak back out before security catches you, which is usually right around the time the servers go back online (but make sure to keep an eye on the forums to know exactly when that will be).

Sex is way more than just an okay way to kill time in the middle of the night before the servers go back online. My boyfriend may not have the body of Sai Sahan or the soft pelt of Razum-Dar, but what else am I supposed to do with this useless finger dexterity? If I can’t use my resto staff, at least he can use his.