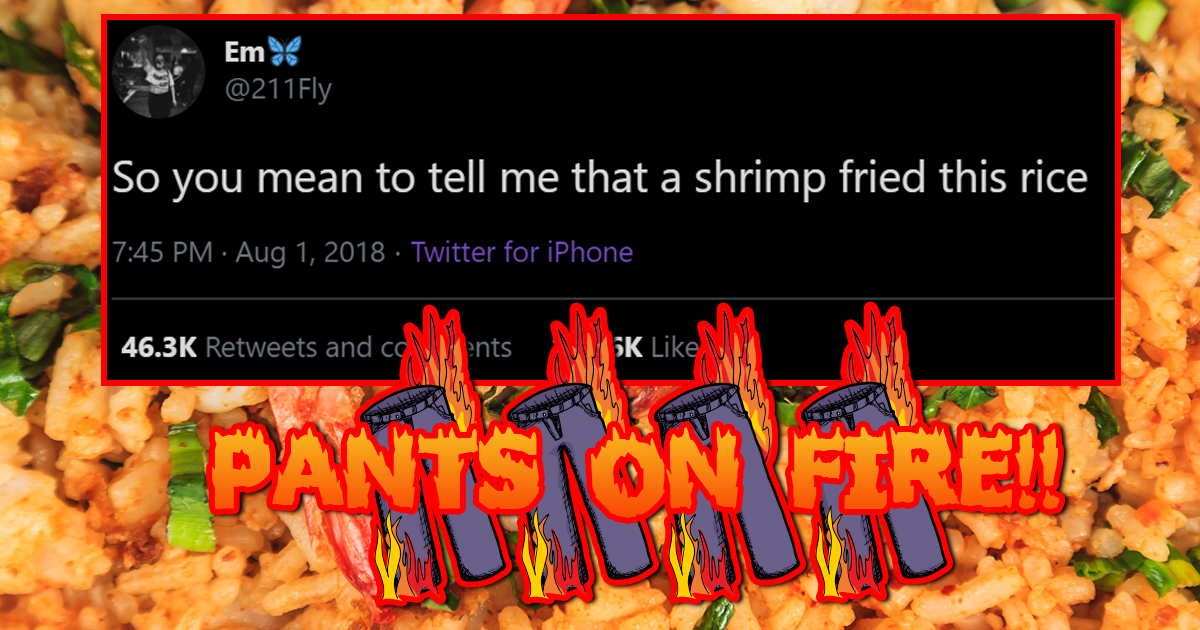 Recently we have been seeing a multitude of people on social media claiming that Shrimp Fried Rice got its name from the fact that a “shrimp fried this rice.” It’s time to set the record straight once and for all. Hard Drive gives this claim that “a shrimp fried this rice” a PANTS ON FIRE rating, our starkest ranking of falsity.

So what’s the truth here? Well it’s actually quite complicated. You see, it’s actually called “Shrimp Fried Rice” because the dish itself consists mostly of fried rice. The rice, however, contains shrimp within it.  The “Shrimp” in the phrase “Shrimp Fried Rice” acts not as an active noun, but as a sort of adjective. “Fried,” similarly, is not a verb, but a noun. The shrimp is modifying the fried rice, as opposed to cooking it themselves.

The earliest record of fried rice in history is found in the Sui dynasty, beginning in the year 589. So how do we know that a shrimp, nearly fifteen hundred years ago, did not fry this rice? Surely, Hard Drive’s fact checkers were not alive during this time period in order to check themselves (an assumption that we rate as 100% ACCURATE, for the record).

Well, historians believe that fried rice dishes came about in Chinese cuisine possibly as a way to incorporate leftovers from other dishes into a new meal. So, as the theory goes, a family may have eaten a hearty shrimp meal with some vegetables one day. The next day, with just a little bit of shrimp leftover, they would cook it into a fried rice meal, hence Shrimp Fried Rice.

But this wasn’t enough for us. We decided to reach out to Bryan Hao, the head of East Asian Studies at the University of California-Berkeley.

“It is not called Shrimp Fried Rice because a shrimp fried the rice. I can assure of that fact — and I was much younger than today-years-old when I discovered it,” Hao said over the phone, confirming our assumptions. “It is actually called Shrimp Fried Rice, not because a shrimp was the one who fried the rice itself, but because the fried rice has shrimp in it. I sincerely hope this helps. You seem very lost.”

Not anymore, we’re not. We sincerely hope this helps readers make sense of what is real and what is not, considering the climate of Fake News we all live under. We all need to be informed going into the 2020 election. There is nothing more important than voting.