Can You Violate the Geneva Conventions in Grand Theft Auto Online, Fruit Ninja, and Putt-Putt Saves The Zoo? 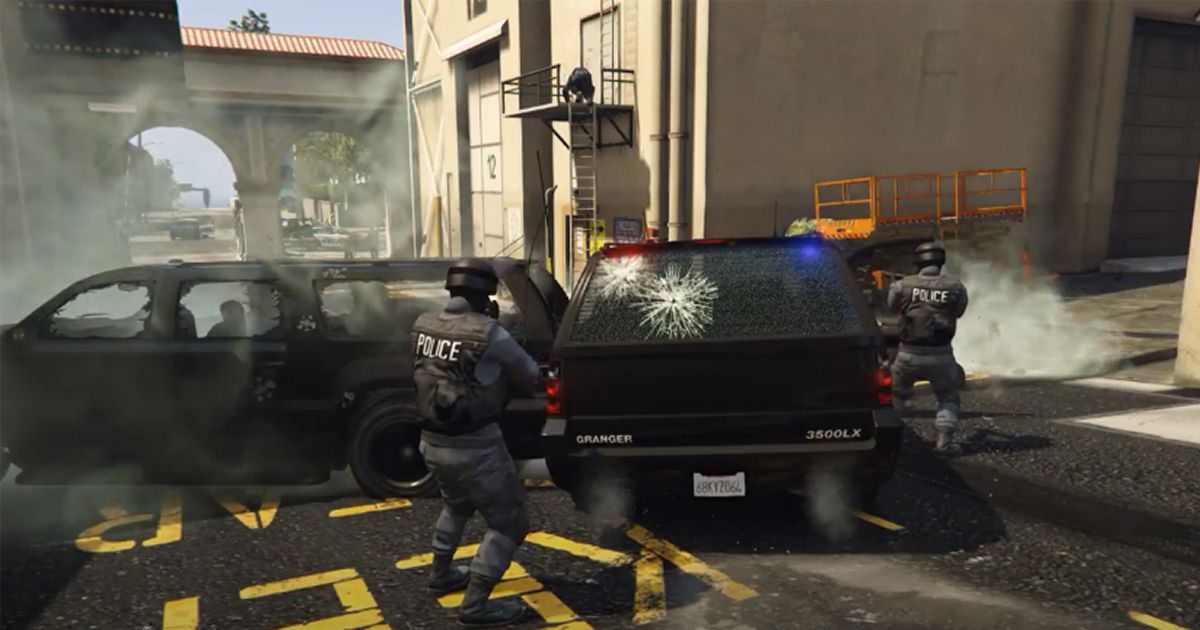 Despite the fact that we have extensive war rules like the Geneva Conventions, countries still boldly violate these standards when there’s no camera present. Take the 2005 killings in Haditha, Iraq, where US marines murdered 24 women and children as revenge for a soldier dying from a roadside bomb.

That may sound horrific, but are gamers any better? You’d be surprised at the kinds of human rights violations players are happy to partake in when they ARE the camera. So, let’s once again tackle some war crimes you may be casually committing from the comfort of your couch.

You can violate the Chemical Weapons Convention (which prohibits the use of tear gas) in Grand Theft Auto Online. pic.twitter.com/kVhvxLqGVy

The Grand Theft Auto series features a bevy of weapons, many of which aren’t suitable for wartime. Take tear gas, for instance, which is explicitly prohibited as part of the Chemical Weapons Convention. If tear gas is too morally grey for war, then you should absolutely not use it in Grand Theft Auto Online against civilians. Only a monster would gas innocent bystanders.

You can violate article 54 of Additional Protocol 1 to the Geneva Conventions (you can not destroy food) in Fruit Ninja. pic.twitter.com/rgm1ebDEQ4

— Can You Violate The Geneva Conventions? (@ViolateGeneva) June 3, 2020

Fruit Ninja is a fun mobile game where you slash any produce that comes across your path. Sounds innocuous, right? Wrong, as always. Destroying food is a major crime, as per article 54 of Additional Protocol 1: “It is prohibited to attack, destroy, remove or render useless objects indispensable to the survival of the civilian population, such as foodstuff.” Did you ever stop to ask yourself who’s food you’re destroying? Because there’s a good chance that multiple families have starved to death due to your actions.

You can violate article 33 of the 4th Geneva Convention (pillage is prohibited) in Barbie: Explorer. pic.twitter.com/EAZkYMHuVM

— Can You Violate The Geneva Conventions? (@ViolateGeneva) June 1, 2020

Don’t be fooled by the care-free attitude: Barbie is a colonizer. Don’t take our word for it; just look to 2001’s Barbie: Explorer. In this Tomb Raider knock-off, Barbie explores foreign cultures, leaving a path of inconceivable offenses. For instance, she regularly violates article 54 of the 4th Geneva Convention, which very plainly states “pillage is prohibited.” This is what white privilege looks like.

The US government may have violated article 147 of the 4th Geneva Convention (no biological experiments on civilians) if the rumors surrounding Polybius are true. pic.twitter.com/i4yN6VF1wR

— Can You Violate The Geneva Conventions? (@ViolateGeneva) June 1, 2020

For decades, gamers have been mystified by the urban legend of Polybius. The story goes that, one day, mysterious cabinets briefly popped up in arcades across Portal, Oregon, which made players sick. Gamers reported seeing men in black suits monitoring the machines. CIA? FBI? Doesn’t matter: if the story is true, the US government is in huge trouble. Article 147 of the 4th Geneva Convention explicitly prohibits “biological experiments.” If you were ever a victim of these cabinets, we recommend you alert the International Criminal Court immediately.

You cannot violate the Geneva Conventions in Putt-Putt Saves the Zoo. pic.twitter.com/QD2GGBHUzK

We are happy to report that Putt-Putt’s conscience is clear when it comes to war crimes. However, this does not give him a free pass for the amount of carbon this old jalopy puts into the atmosphere. Remember, just because you’re not a war criminal doesn’t mean you’re a good person.