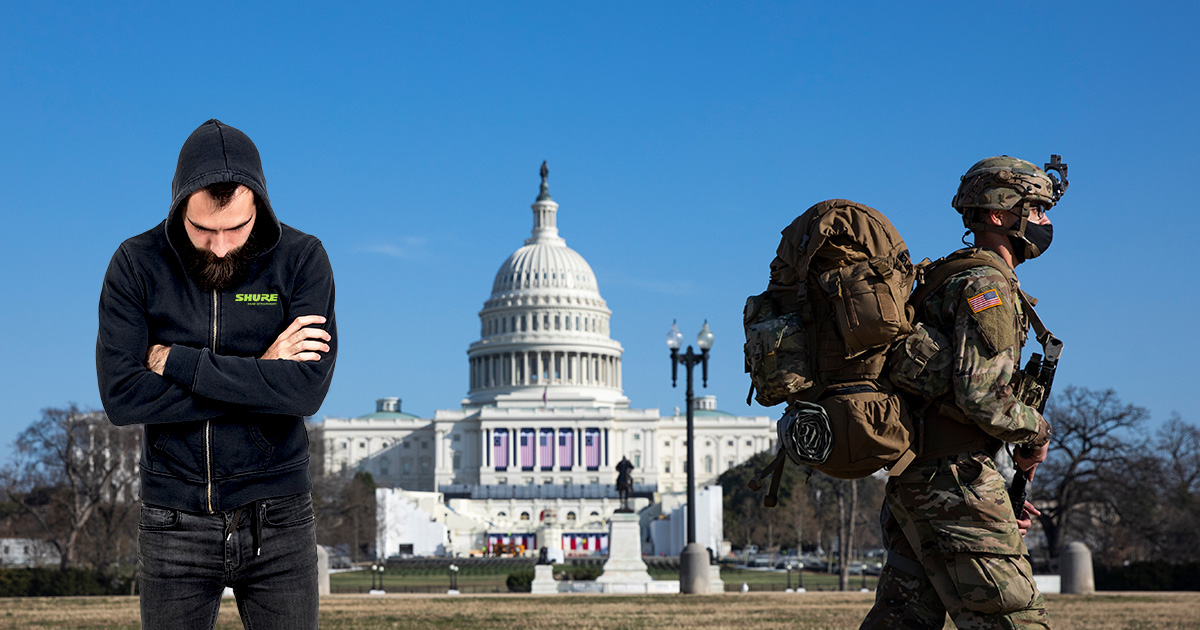 WASHINGTON — Capitol security officials announced this morning that the inauguration of President-elect Joe Biden will be secured by 25,000 National Guard Troops and one incredibly pissed-off sound guy, D.C. sources reported.

“We are committed to ensuring a safe, incident-free inauguration day, which is why we’ve made the decision to deploy the National Guard and sound-guy Mike Chopski to the Capitol,” said inauguration security advisor Yvonne Struthers. “It may seem drastic, but deploying Mr. Chopski was our best deterrent against an incursion like what we saw on January 6th. I spoke with him earlier today and he assured me that anyone who gets within 500 feet of his soundboard is a ‘fucking dead man’ — and that includes other Capitol security personnel and, as he said, ‘that goes for Biden as well.’ Oh, and I guess the National Guard can help out a bit, too.”

Chopski was eager to help secure Biden’s inauguration after finding out that a PA had been damaged during the January 6th Capitol insurrection.

“Let it be known that I will beat the living fuck out of anyone who screws with the vocal mics. Domestic terrorist or not,” said Chopski, after chewing out a CNN reporter who tripped over a power strip. “Those freaks who ransacked the Capitol have another thing coming if they think they can do the same shit to my backline. They’re just like the drunks I have to chase off the stage before they can drool all over the monitors. I swear, I’ll lay out any fuckhead who even thinks about tampering with my perfectly dialed-in setup. And if you think I’m mad now, just wait until after I’ve just finished Biden’s three-hour soundcheck. I won’t hesitate to skin alive any MAGA shithead who even thinks about putting his Dorito dust-covered fingers on the fucking drums.”

“While deploying thousands of National Guard troops does help, having Mike run sound is the real deterrent. A soldier will just shoot you, but Mike will verbally dress you down until you no longer want to live,” said the incoming Vice President. “Ted Cruz once knocked over a PA and Mike lit into him so hard that Cruz started crying in front of the entire Senate. I almost felt bad for the guy, but then I realized it’s Ted, and I thanked Mike for his service.”

At press time, nearly half of the 25,000 National Guard troops stationed in D.C. have been yelled at by Chopski.