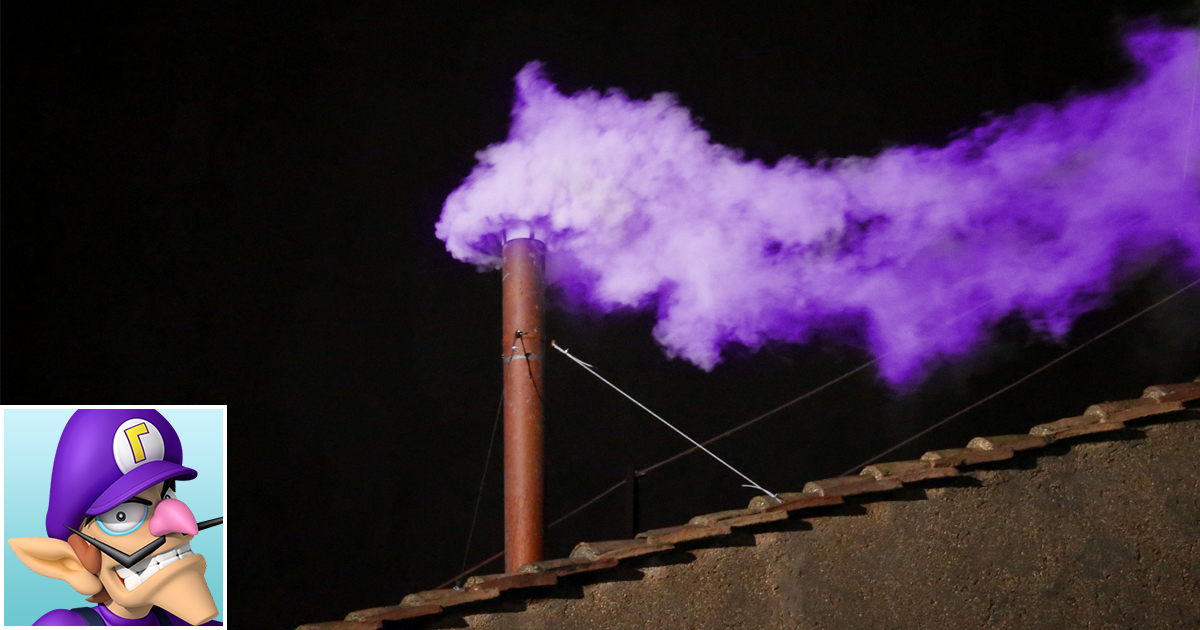 KYOTO, Japan — Onlookers audibly gasped, whispered with excitement, and began to raise their voices in prayer as purple smoke rising from the Nintendo headquarters in Japan signaled that a new Waluigi had finally been chosen.

A congregation of pilgrims outside of the building have camped out for weeks since the former Waluigi, whose full title is Waluigi Boniface VIII, shocked the world by announcing that he would be stepping down from the Waluigicy, becoming the first Waluigi not to hold the office until death. The conclave to select a new Waluigi convened soon after to begin deliberations on a successor.

Finally, this afternoon, three purple billows of smoke rose from the warp pipe chimney on the roof of the building to announce the decision. This was followed by an announcement in Latin, “Habemus Waluigam,” or “We have a Waluigi,” and a traditional chant of  “Wa ha ha!” sounding from the building’s external speakers.

The new Waluigi, a golfer, kart driver and tennis player from Guatemala, has chosen the name Waluigi Adeoatus III in accordance with tradition. The gathered faithful masses expressed hope that the new Waluigi would bring forth a new age of peace and harmony for Nintendo fans throughout the world, as well as make it into Smash Bros as a DLC character.

“As soon as I saw the first tufts of purple smoke, I felt like a weight had been lifted off my soul,” said devout Nintendo fan, Emily Camendon, 26, while clutching a gold medallion in the shape of an upside-down L hanging from her neck. “It feels like my prayers have been answered, and I have faith that our new Waluigi will guide us in the right direction.”

Nintendo fans on the internet echoed the sentiments of the gathered masses, taking to social media to celebrate the new Waluigi. “This is a Waluigi of the common man! Blessings unto him!” tweeted Nintendo super-fan @StuntRace6420.

Though the new Waluigi has yet to be reached for comment about his goals for the company’s future, he did take time to address the crowd from the executive balcony, waving to the crowd and declaring, “Waluigi time! Heheheh yeah!” while raising a tennis racket over his head and pumping his fist toward the heavens.