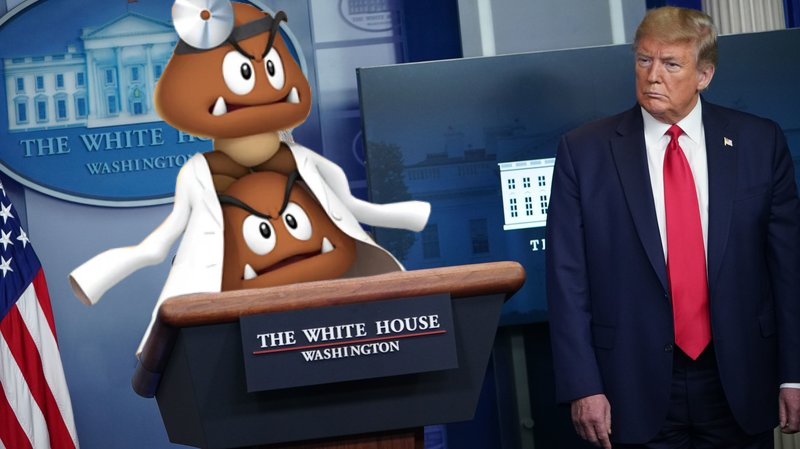 WASHINGTON — President Trump announced this morning that he would be naming Dr. Goomba Tower as the new head, head, and head of the COVID-19 Task Force overseeing the country’s re-opening efforts.

“Dr. Goomba Tower has some tremendous qualifications, just beautiful qualifications, some people are saying they are the most qualified doctor they have ever seen because they have three heads so basically, well I am very proud to bring them onto the team, and it’s a wonderful team, everyone is terrific, there’s of course some awful traitors, but they’re gone now, so the Goombas are on the team, to keep six eyes on the country as we return to having the best economy America has ever seen,” the President said in a single sentence during a press briefing at the White House. “Tremendous.”

While Dr. Goomba Tower claims to be an experienced virologist, critics are skeptical of their plan to re-open the country by giving each american an assortment of red, blue, and yellow pills.

“I’m ashamed to have graduated from the same-a medical school as Dr. Goomba Tower,” said one epidemiologist/go-kart driver/olympic athlete/plumber who requested to remain anonymous. “To have-a Dr. Goomba Tower standing up there with no mask on any of their three faces, it’s-a simply irresponsible. Our leaders should-a lead by example! Please, for everyone’s sake, wear a mask. YA-HOO!”

Despite many states reaching record numbers of COVID-19 cases this past week, President Trump insisted that states must continue to reopen, noting that Dr. Goomba Tower themselves supported the president’s position.

“Dr. Goomba Tower is a tremendously insightful tower of monsters,” President Trump claimed. “The other day I asked them, I said ‘Look, Doctor, lots of people are saying we have to slow down testing, we have to slow it down, we would have many fewer cases if we slowed down testing, isn’t that right?’ and they said, you know what they said, they said ‘Weep weep worp.’ Weep weep worp, folks. This thing has a brilliant head on its two other heads.”

At press time, Dr. Anthony Fauci was unable to be reached for comment as he was locked behind a newly added microtransaction pay-wall.