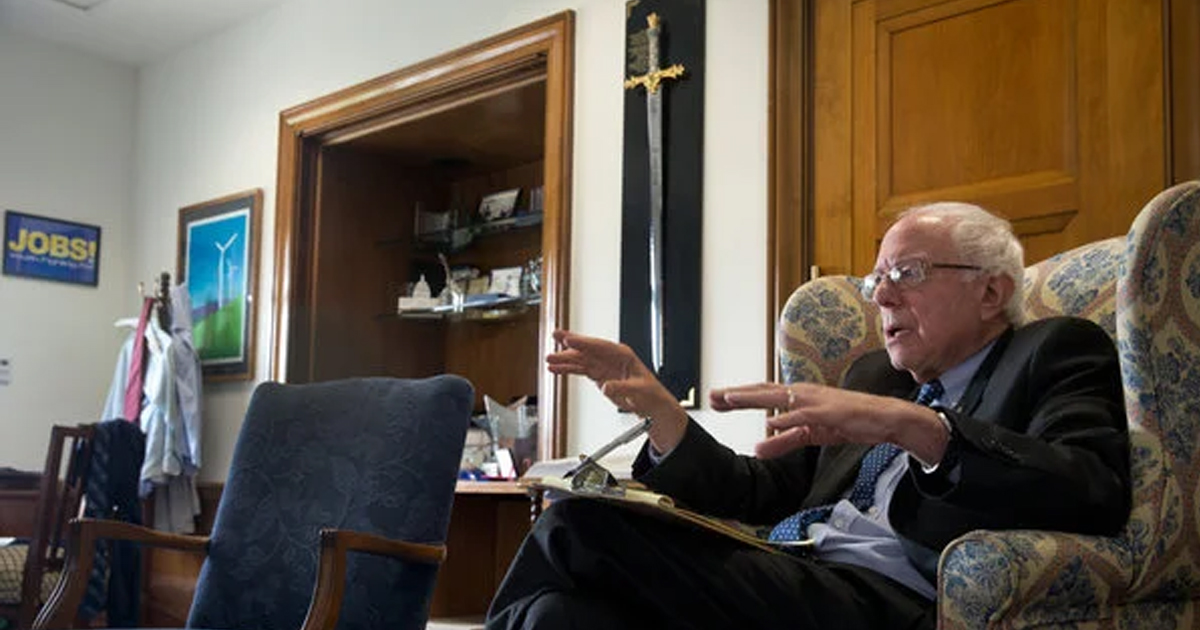 The 2020 Democratic Primary race is shaping up to be a cutthroat march to the nomination. Well, it was, until I learned that Bernie Sanders owns a badass sword. Holy shit. When I saw the photo of Senator Sanders sitting next to his stunning He-Man-esque blade, I knew that I’d devote myself completely to getting him elected President.

Let me be clear: Bernie Sanders is THE sword candidate this election, and he has 100% earned my vote. Unless, of course, one of the other candidates comes forward with evidence that they own two or more swords.

I am a single-issue voter, and that issue is swords. I will vote for any candidate courageous enough to unsheath a beautiful and powerful blade on Inauguration Day and slice that damn Bible in half, swearing themself into office as the most mighty and undefeatable president of all time -|—— except for maybe George Washington, who is shown wielding swords in several paintings.*

Swords do not discriminate. Rich or poor, black or white, they will kill the shit out of you and they are badass as hell. Some say that Sword Candidate Sanders is weak on race, but no one can say that he is not strong on sword. Bernie’s sword can probably cut through four or five (FULL) water bottles in one swing. Just look at the goddamned thing.

If I have not already made it perfectly clear that the sword-bearing Sanders is my man, and if another candidate should attempt to sway my vote, here’s what I will need: the candidate should submit to me an undoctored, well-lit photograph depicting them with their swords. The candidate should also be holding a newspaper or something so I know it’s a recent photo. Maybe they could hold the paper in one hand and the swords in the other hand. That’ll look cool as shit.

And, of course, if Bernie’s sword is too intimidating for the party line, I’d potentially be willing to settle for someone with a large collection of throwing stars or even knives. Maybe.

Frankly, I don’t see any of these scenarios happening. Kamala Harris is clearly a gun person, Elizabeth Warren has that tomahawk she keeps bringing up that makes everyone uncomfortable, and while I admit that Joe Biden might have a sword, it’s probably some dumb Navy cutlass that isn’t even sharp.

In conclusion, until a New York Times Sunday Edition shows up at my door with Beto O’Rourke double-fisting katanas on the cover, it’s Bernie all the way!

*I don’t use em dashes, I use sword dashes.