Dad Reviews Skyrim: “How do I move?” 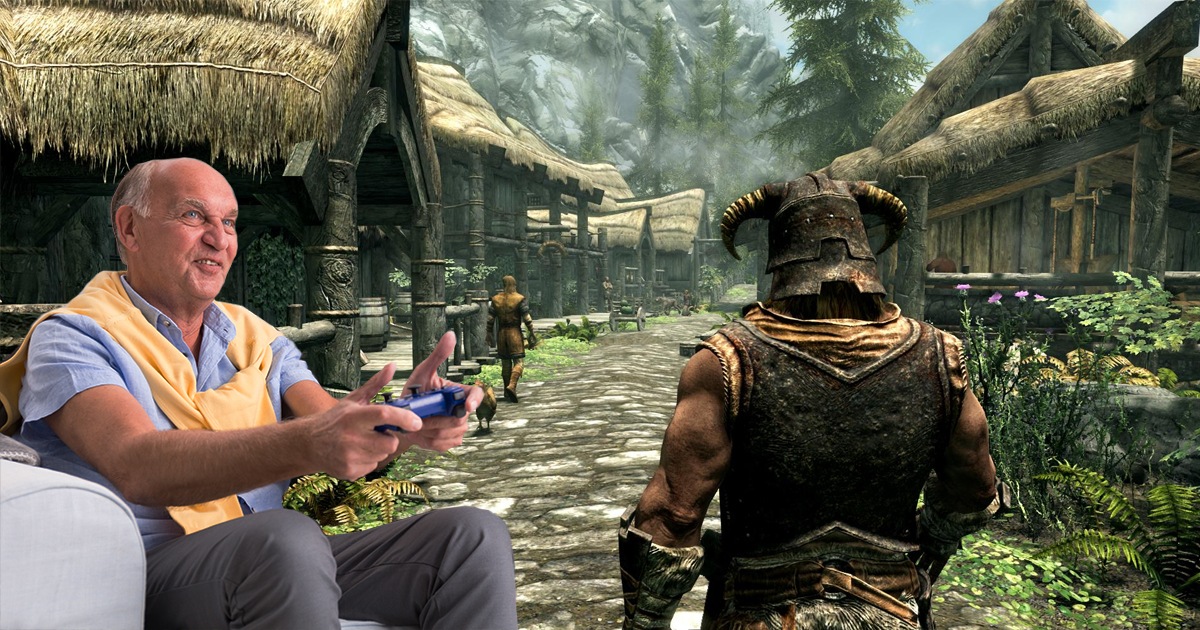 Hundreds of hours of dangerous adventure, amazing discovery, and enchanting exploration. I just wish I could have seen that instead of the ground the entire time.

I started my journey into the land of Skyrim after two full hours in the character creator. There are many options to choose from when making your hero, but the one that allows you to start the game is very well hidden. Finally, I saw how to exit that menu and continued my adventure. My next challenge was to escape from an attacking dragon. The monster was incredibly fierce and I was killed 16 times during this quest, each time stuck in the same corner.

I met a man who offered to escort me to safety, which he did. But not before a long battle waged between us when I tried to speak to him, but instead kept punched him in the face. If that man reads this, please know I am very sorry.

After escaping danger and setting off into the open world, I felt like my options were limitless. Until my brother called and we ended up talking about his sciatica, which had apparently flared up again.

Once I returned to my game 45 minutes later, I realized I had not paused—luckily, however, everyone in the game had waited for me, including the dragon! Still, I was frozen in my tracks with no idea how to move aside from punching. I stood there for hours hiding from the unrelenting dragon attacks on my friends in Skyrim.

The open world aspect of this game is brilliant. Knowing you can travel for miles around a beautiful world yet being stuck frozen in one spot while a dragon ravages the walls of the village you are hiding—it’s a beautiful piece of art that I have never experienced anything like. It’s all a fascinating message about the world we live in: trapped in our places from birth, seeing a vast open world outside our windows, but unable to move at any time.

Skyrim may be a dense world of fun with gorgeously textured floors, grass, and dirt, but ultimately will not allow you to move past the first village.