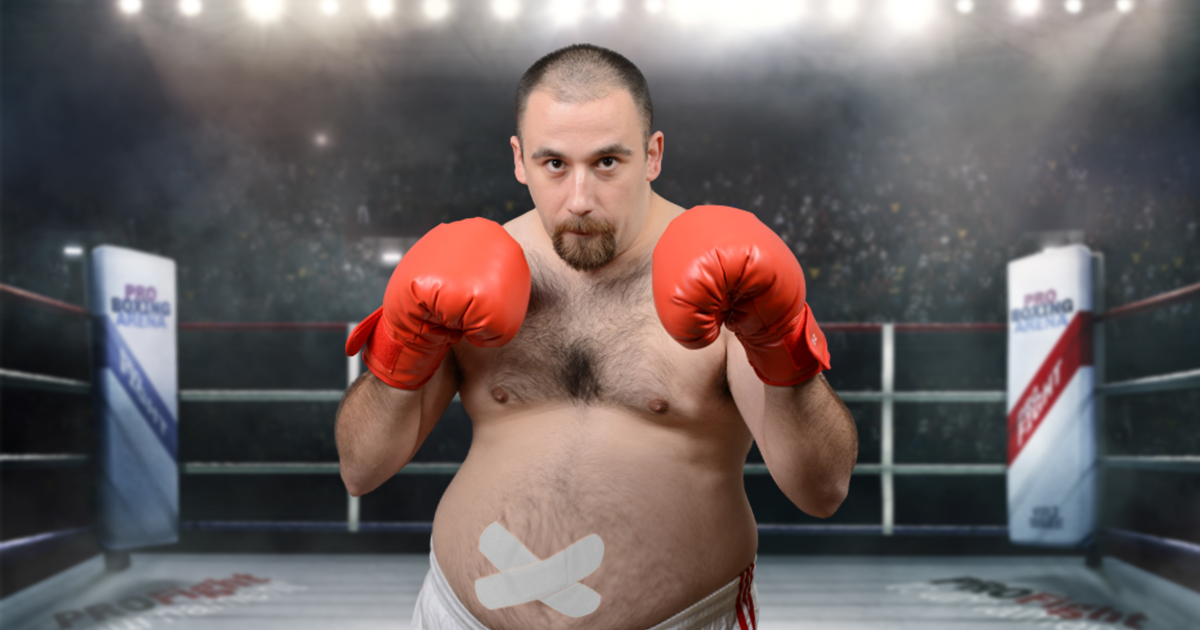 LAS VEGAS — Amateur boxer Mackenzie Smalls is making waves after knocking out heavyweight champion Kingsly Ippolito with a flurry of punches to his big fat belly.

“I was trying to aim right for the jaw, but it just wasn’t working,” Mackenzie said, following the surprise victory. “But then, I noticed that his tummy was hanging out over his shorts. Just sitting out there like a big, round punching bag. There were even a few pieces of tape that sort of made an “X.” So I thought, ‘What the heck,’ and pelted that sucker with a few left hooks. He fell like a sack of shit after that.”

The surprising match occurred when Smalls, a featherweight who had just started boxing professionally, challenged the 315 pound Ippolito. The unprecedented matchup began as many expected, as Ippolito began the fight clobbering Smalls with a series of devastating blows. On a few occasions, Smalls went down, seemingly knocked out, but miraculously got back up at the count of nine.

“I don’t understand what the hell happened out there,” an enraged Ippolito told reporters backstage. “This pipsqueak should have been dead. I fractured his skull. I caved his ribcage in. And you’re telling me this guy gets back up, jabs me in my prize gut, and puts me to sleep? What are his gloves made out of, zinc?”

Since besting Ippolito, Smalls has defeated a whole host of heavyweight icons. Analysts are baffled by his breakout success and his unparalleled commitment to strategy. Smalls seems to debut a new tactile approach every match, sticking to one pattern throughout each bout, to incredible results thus far into his short career.

“I wish I could take credit for this boy’s natural talent,” said Small’s coach Louis Bickle. “If I’m being honest, I don’t think I really contribute much to his training. I mostly just stand in his corner and just yell obvious tips or ask him what his favorite food is. Mine’s chocolate, ha ha!”

Smalls’ rise to stardom will culminate this weekend in a dream match vs. the legendary Mike Tyson.

UPDATE: Mike Tyson will no longer compete at the event. Promoters have insisted that the last-minute replacement will be comparable to Tyson in almost every way.